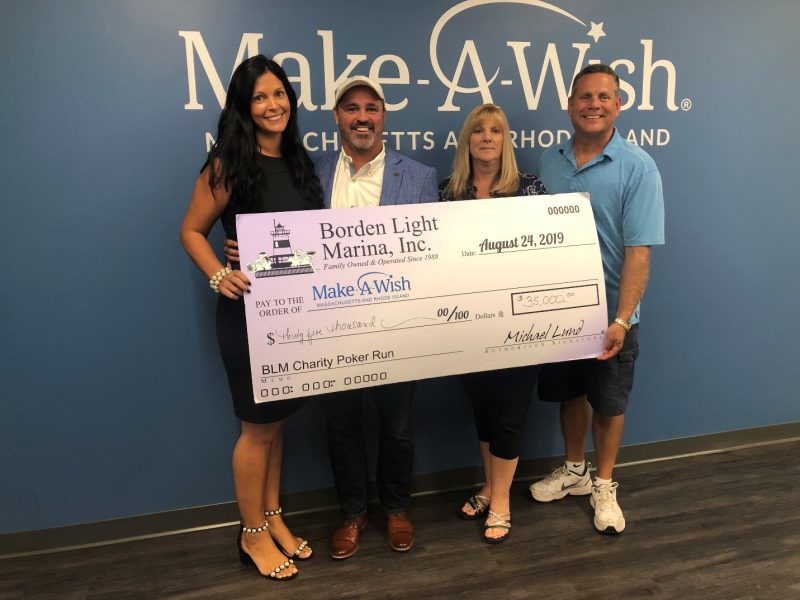 Pictured: Nicole and Michael Lund of Borden Light Marina with George and Robyn Polillio of Bumper to Bumper Accessories and Hillary Muntz of Make-A-Wish Massachusetts and Rhode Island.

The Poker Run started in 2006 and now averages 52 boats each year. The run is open to all vessels with speeds above 50 miles per hour. The boat race starts and ends at the Tipsy Seagull in Fall River and includes stops in East Providence, Warwick, Newport and Bristol, Rhode Island.

Michael Lund, owner of Borden Light Marina and his wife, Nicole, have become instrumental in organizing this competitive event, giving 100% of the net proceeds back to local charities. Alongside Michael and Nicole, George and Robyn Polillio of Bumper to Bumper Accessories spearheaded Make-A-Wish Massachusetts and Rhode Island becoming the featured charity at this year’s event.

Guests at the Borden Light Marina were joined by wish parent, Jennifer ONeill and her two sons, Nicholas and Jack. Nicholas received a travel wish in 2018. Jenn spoke about her family’s wish experience how much it positively impacted them.

“We are extremely grateful to Michael and Nicole Lund, as well as George and Robyn Polillio,” said Charlotte A. Beattie, CEO of Make-A-Wish Massachusetts and Rhode Island. “Their passion for helping others is inspiring and will help toward our ultimate goal of fulfilling every eligible child’s wish.”

To learn more about Make-A-Wish Massachusetts and Rhode Island and find out how you can get involved, visit massri.wish.org