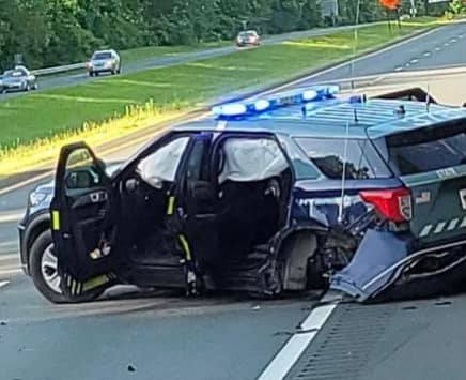 A Massachusetts State Trooper was injured after stopping a wrong-way driver.

According to the State Police Association of Massachusetts, on June 10, at approximately 5:30 p.m., the State Police Shelburne Falls barracks was alerted to a wrong way operator on I-91 in the Town of Bernardston.

The vehicle was traveling South on I-91 North and travelled the wrong way for several miles, nearly striking numerous vehicles. Trooper Trombley of State Police Shelburne Falls paralleled the dangerous vehicle. Trooper Trombley sped to the next emergency turnaround and despite the risk of serious injury to himself, he immediately placed his cruiser in the vehicle’s path to prevent a potential head-on collision between the offender and an innocent driver.

SPAM lauded Trombley for his actions.

“As a result of Trooper Trombley’s quick thinking, he was able to utilize his cruiser to stop the wrong-way operator and heroically save the lives of innocent commuters.”

Trooper Trombley and the suspect operator were transported to the hospital for injuries sustained in the crash.

At this time, the incident remains under investigation.