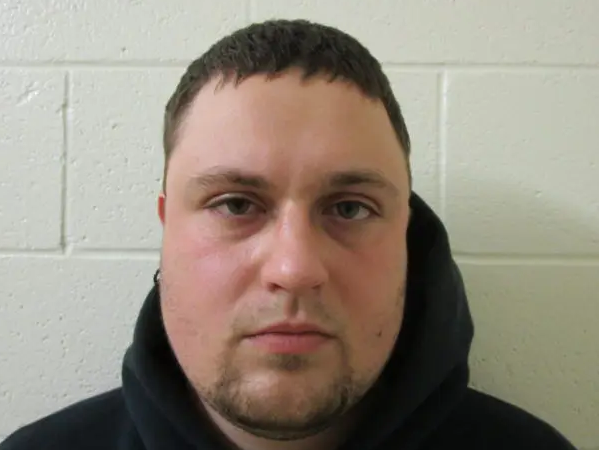 On Wednesday, Feb. 3, Marion Animal Control Officer Susan Connor received information regarding a pitbull-type dog that was allegedly being kept by 26-year-old Brandon Davis inside of a home on Mill Street. The person was concerned for the wellbeing of the animal, which was reportedly being kept inside of a cage in the home and was only being let out of the cage a few times per day to go to the bathroom outside. The person also reported unsanitary conditions inside of the dog’s cage and that the dog was emaciated.

ACO Connor went to the home Wednesday and attempted to speak with Davis regarding the complaint, but was unable to make contact with anyone inside of the home. ACO Connor also observed a dead chicken on the ground outside of the home.

On Thursday, February 4, Marion Police obtained and subsequently executed a search warrant for the home.

Officers found a female pitbull-type dog inside of a cage. The dog appeared to be emaciated and had blood on its tail. It was immediately seized by ACO Connor and transported to Cape Cod Veterinary Specialists where it is receiving treatment. The dog is expected to make a full recovery, but will likely require extensive treatment and rehabilitation.

Officers observed what appeared to be animal waste, dirty rags, scattered dried dog food and overturned water bowls without signs of drinking water inside of the cage. During their search of the home, officers also located ammunition.

Davis was arrested at the home without incident and charged with Cruelty to an Animal and Possession of Ammunition Without an LTC/FID Card. He was released on $340 bail. He is expected to be arraigned today in Wareham District Court.

“I’d like to commend ACO Connor, Det. Scott Smith, Officer Jonathan Castro and Sgt. Sean Day for their diligent work throughout this investigation, which resulted in an animal being removed from poor conditions,” Chief Nighelli said. “I’d also like to thank Cape Cod Veterinary Specialists for their work providing care and treatment to the dog.”

The Marion Police Department is accepting donations to the PAUS Fund, which is a town fund that regularly aids in the placement and care of animals, to assist in covering the cost of the dog’s veterinary care. Anyone interested in donating to the fund can mail a check to:

Checks should be made out to the Town of Marion with a memo of “PAUS Fund.”