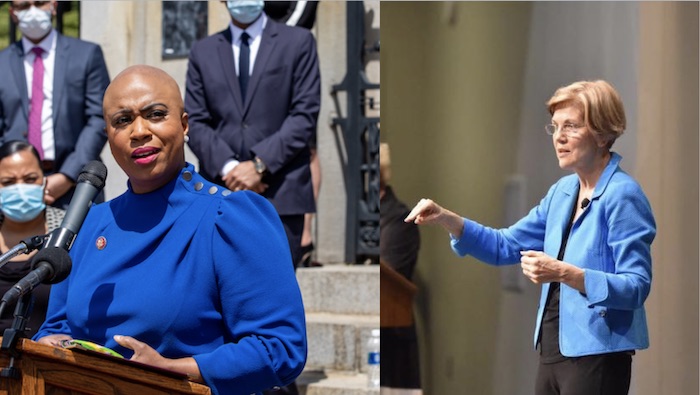 U.S Rep. Ayanna Pressley and U.S. Sen. Elizabeth Warren indirectly weighed in on Beacon Hill’s raging debate over policing reform on Wednesday, announcing new federal legislation prohibiting the use of federal funding on police in schools. The presence of police in schools has featured prominently in the legislation and debate over the past couple of weeks in the Legislature, and House and Senate negotiators are currently trying to strike a compromise on policing reform plans.

“Every student should be able to learn in a setting free from fear,” Pressley said in a statement. “But for too many young people – particularly Black and brown students, immigrant students, students with disabilities, LGBTQ+ students and other historically marginalized students – the very presence of police officers in schools increases the likelihood that they will be criminalized and put on a path to confinement for everyday childhood behavior.”

Pressley and Warren previously sided with state legislators fighting to reform qualified immunity for police. Now they’ve let it be known where they stand on another key policing issue. “Counselors, nurses, social workers, and educators belong in schools. Police do not,” Warren said.