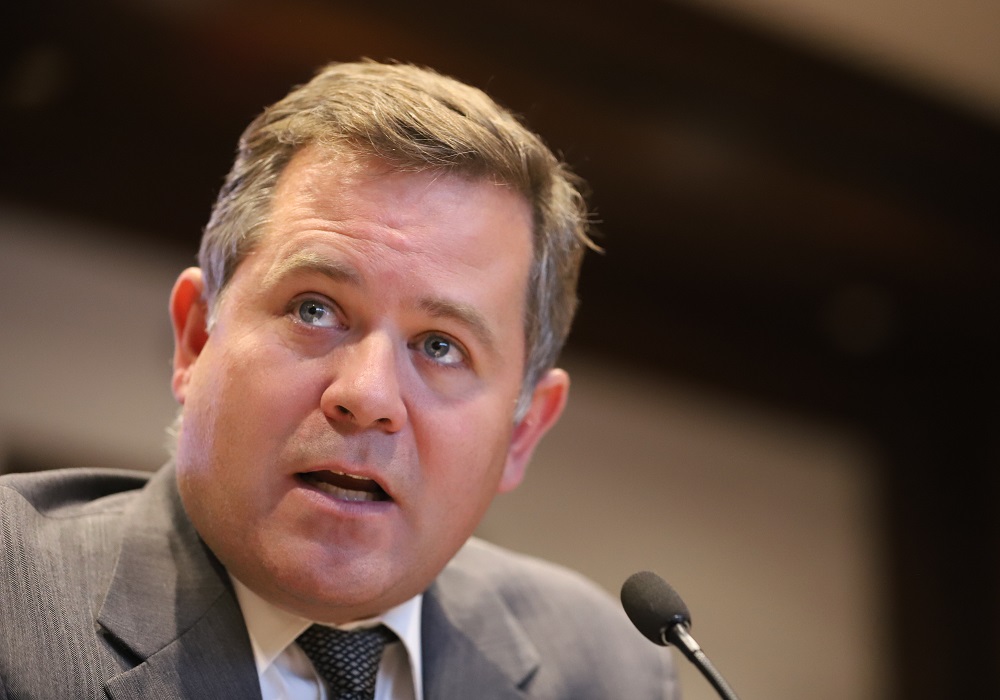 Rep. Mike Day, co-chair of the Judiciary Committee, called the Supreme Court a "rogue court" and alleged that its decision was "intellectually dishonest." [Sam Doran/SHNS/File 2019]

The New York State Rifle & Pistol Association v. Bruen decision holds that New York could not constitutionally require citizens to demonstrate a “special need” before they could receive a license to carry firearms in public for self-defense.

“Nothing in the Second Amendment’s text draws a home/public distinction with respect to the right to keep and bear arms, and the definition of ‘bear’ naturally encompasses public carry,” Justice Clarence Thomas wrote for the majority. “Moreover, the Second Amendment guarantees an ‘individual right to possess and carry weapons in case of confrontation,’ .. and confrontation can surely take place outside the home.”

Stephen Breyer, Sonia Sotomayor and Elena Kagan, the court’s only justices appointed by Democrat presidents, were the three dissenting justices.

“Many States have tried to address some of the dangers of gun violence just described by passing laws that limit, in various ways, who may purchase, carry, or use firearms of different kinds,” Breyer wrote. “The Court today severely burdens States efforts to do so.”

The 6-3 ruling appears likely to force states, including Massachusetts, to rethink their gun laws.

“The Foundation will be doing everything in its power to help restore the right to carry for law-abiding Americans in these states, and we’re eager to work with our members who’ve had their rights denied for far too long,” Hill said.

But a Gov. Charlie Baker spokesman said the ruling on New York’s law “has no immediate effect on the Commonwealth’s gun laws, which all remain in place.”

Guns On Their Side?
But while Healey, a leading candidate for governor, warned that “in a country flooded with firearms, today’s reckless and anti-democratic decision poses a grave danger to Americans as they go about their daily lives in public spaces like supermarkets, hospitals, and playgrounds,” the House chairman of the Judiciary Committee, Rep. Mike Day, promised “we’re not going to see people walking around in churches and schools with guns on their side.”

Day didn’t specify a policy response to the decision and said analysts are still digging through the ruling, including a concurring opinion written by Justice Samuel Alito, and planned to talk with police chiefs, who play a significant role in gun licensing in Massachusetts.

“We’ll be ready to tighten up the nets to the extent that they’re loosened by today’s decision,” said Day, who called the Supreme Court a “rogue court” and alleged that its decision was “intellectually dishonest” and “cherry picks history, it cherry picks what regulations they want to pay attention to, which ones they want to ignore, in order to carry out a political decision here.”

House Speaker Ron Mariano said a policy response may come before formal sessions wrap up for the year on July 31.

“It certainly creates a bit of a cloud as to what’s acceptable,” Mariano said. “It’s always been a sticking point around the Second Amendment, and the presumption of the qualifications to carry, so now we’re in this never-neverland, and I’ll leave it to the attorneys to read the law a lot closer than I could ever read it. But I do know that whatever road we take, it’s not going to be easy. It’s going to require a little bit of work.”

Defenders of Massachusetts gun laws credit those laws with lower rates of gun violence, and Mariano knocked the “activism” and “political agenda” that he sees on the high court. He called the ruling a “blatantly political decision that’s been crafted by the leaders of the Republican Party in the Senate.”

“In vindicating an individual’s right to carry loaded guns in public without any showing of special need, the court’s decision is likely to call into question the half dozen other state concealed carry permitting laws similar to New York’s,” Charles said. “Though these constitute a minority of states, a sizeable portion of the population — around 25 percent of Americans — live in jurisdictions with these more restrictive laws.”

Healey did not propose any specific policy response to the ruling but said she’s ready to defend the state’s gun laws.

“Gun violence is a public health epidemic, and I remain committed to doing everything I can to keep our residents and our communities safe,” she said. “Massachusetts has one of the lowest gun death rates in the country because we know that strong gun laws save lives. I stand by our commonsense gun laws and will continue to vigorously defend and enforce them.”

“All That We Decide”
Justice Alito devoted part of his concurring opinion to attacking arguments of the dissenting justices, including arguments about mass shootings.

Alito said amicus briefs in the case described situations where citizens “used firearms to protect themselves from criminal attack,” including “incidents in which a potential victim escaped death or serious injury only because carrying a gun for self-defense was allowed in the jurisdiction where the incident occurred.” He concluded, “All that we decide in this case is that the Second Amendment protects the right of law-abiding people to carry a gun outside the home for self-defense and that the Sullivan Law, which makes that virtually impossible for most New Yorkers, is unconstitutional.”

In his dissent, Breyer said the court in its new ruling failed to discuss “the nature or severity” of gun violence, which he said had surpassed car crashes as the leading cause of death in children and adolescents. The U.S. “suffers a disproportionately high rate of firearm-related deaths and injuries,” Breyer wrote, citing a 2017 estimate of 393.3 million civilian-held firearms in the U.S., or about 120 firearms per 100 people. In 2015, about 36,000 people were killed by firearms nationwide, a number that rose to 45,222 in 2020.

In a September 2021 brief with 19 other attorneys general, Healey had urged the court to affirm that the Second Amendment does not prohibit states and local governments from regulating the public carry of firearms “as they have done for hundreds of years.”

The brief argued that public carry regulations have varied from region to region through the history of the U.S., and said that “tradition” goes back more than 700 hundred years to England and pre-dates the founding of the United States. Regulations today and centuries ago, Healey’s office said, “varied substantially between and within the States — the result of accountable policymakers enacting regulatory schemes tailored to local needs and conditions.”

Interim Suffolk County District Attorney Kevin Hayden said he had “grave concern” about impacts of the ruling, which comes as the U.S. Senate is advancing a bill drafted in response to the recent school shootings in Uvalde, Texas.

“It’s ironic, and perhaps tragic, that just as the nation’s top legislative body is formulating sensible firearm regulations, its top judicial body is undoing them,” Hayden said. “We must never forget that included in the 2nd Amendment’s establishment of citizen gun ownership are the words ‘well-regulated.'”

U.S. Sen. Edward Markey said the ruling undermines community safety, called for Congress to pass a gun safety bill, and said “we must commit to expanding” the Supreme Court to “reclaim the stolen seats, bring balance to an illegitimate far-right bench, and restore the American public’s faith in the Court.”

“This decision places at risk Massachusetts laws that have effectively driven down the rate of gun in our Commonwealth, like those giving local police chiefs the authority to issue gun licenses, including after interviewing an applicant, and those that bar the concealment of deadly weapons in public,” Markey said. “We know concealed weapons near schools or on street corners across Massachusetts — or anywhere in our country — won’t make parents or their children feel any safer. The Supreme Court has now placed the safety of these families at risk.”

Saying “lives are on the line,” a disappointed President Joe Biden urged states “to continue to enact and enforce commonsense laws to make their citizens and communities safer from gun violence” and called on Americans “to make their voices heard on gun safety.”

The Gun Owners’ Action League in Massachusetts described itself as “absolutely thrilled” by Thursday’s ruling.

“While this decision will certainly have an impact on our rights as lawful and responsible gun-owners in Massachusetts, it is important that we take some time to digest and figure out what it actually means for Massachusetts license holders and firearms owners,” GOAL said on its website. “We ask our members to be patient as we work through this process with legal counsel and determine what the next steps will be. We will keep you up to date as often as possible as to what our actions will be moving forward.”