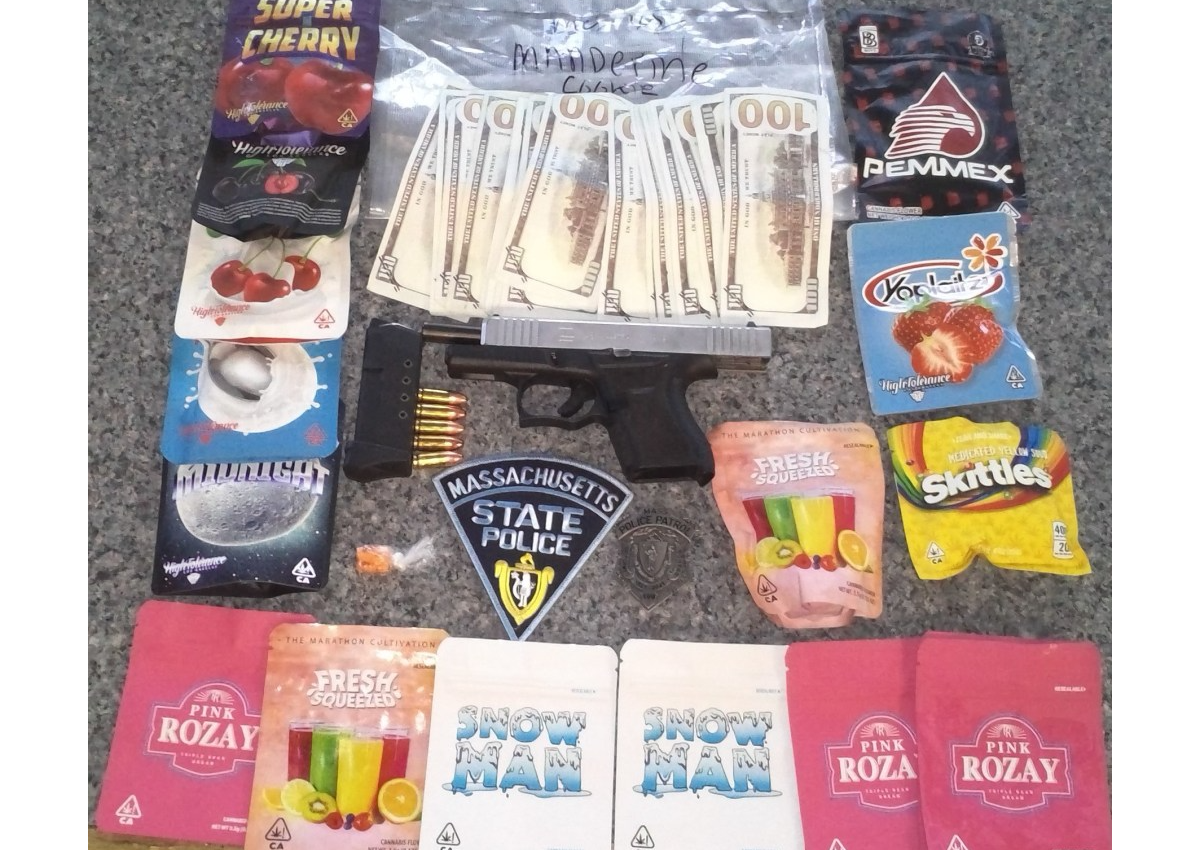 Not staying on the right side of the road led to the arrest of two Massachusetts men.

According to Massachusetts State Police, shortly after 10:30 a.m. on Monday, September 6, Trooper Paul Martin, assigned to the State Police-Middleborough Barracks, was patrolling Route 44 in Raynham when he observed a black Nissan Rogue veer several times into the breakdown lane.

Trooper Martin conducted a traffic stop and made contact with the operator, Angelo Pina, 30, of Taunton, and passenger Adeiu Charles, 24, of Brockton. While speaking to the two occupants of the vehicle, Trooper Martin could see many bags typically used to store marijuana and a plastic bag filled with what appeared to be a large amount of cash.

Upon seeing these indicators of illicit marijuana distribution, Trooper Martin requested backup and was assisted by Trooper Kevin Fredette, and Raynham Officers Michael Civale and Shawn Sheehan. Trooper Martin instructed Pina and Charles to sit still and keep their hands in sight. According to police, Charles repeatedly ignored this order and reached into multiple areas of the vehicle. Trooper Martin ordered Charles and Pina to exit the vehicle and they were placed into handcuffs for safety purposes. During a search of Charles’ person, he attempted to flee from Trooper Martin, but the Trooper was able to maintain control of Charles with the help of Officer Civale.

Upon continuing a search of Charles, a 9mm Glock was found in his waistband. Officer Sheehan was able to make the firearm safe by removing the magazine and a round from the chamber. Police stated that Charles does not possess a license to possess a firearm. Additionally, a small baggie of orange pills was located in Charles’ pocket.

Charles and Pina were placed under arrest and Trooper Martin conducted a search of the vehicle. During the search, Trooper Martin discovered nine plastic bags containing marijuana, and a plastic bag containing fake U.S. currency, and several empty marijuana packages. A review of Pina’s criminal record revealed he was on active federal probation for narcotics distribution. A review of Charles’ criminal record revealed he was a convicted felon with open charges for firearms violations and narcotics distribution.

Charles and Pina were then transported back to the Middleborough Barracks to be booked, photographed, and fingerprinted. Bail was set for Pina at $140, and for Charles at $20,040.

Pina was scheduled to appear in Taunton District Court on the charges of, Possession with Intent to Distribute Marijuana, Conspiracy to Violate Drug Laws, and Marked Lanes violation.

Charles was charged with Carrying a Loaded Firearm, Possession of Ammo without FID, Carrying a Firearm with 3 Prior Violent/Drug Crimes, Possess with Intent to Distribute Marijuana, Conspiracy to Violate Drug Laws, and Resisting Arrest.