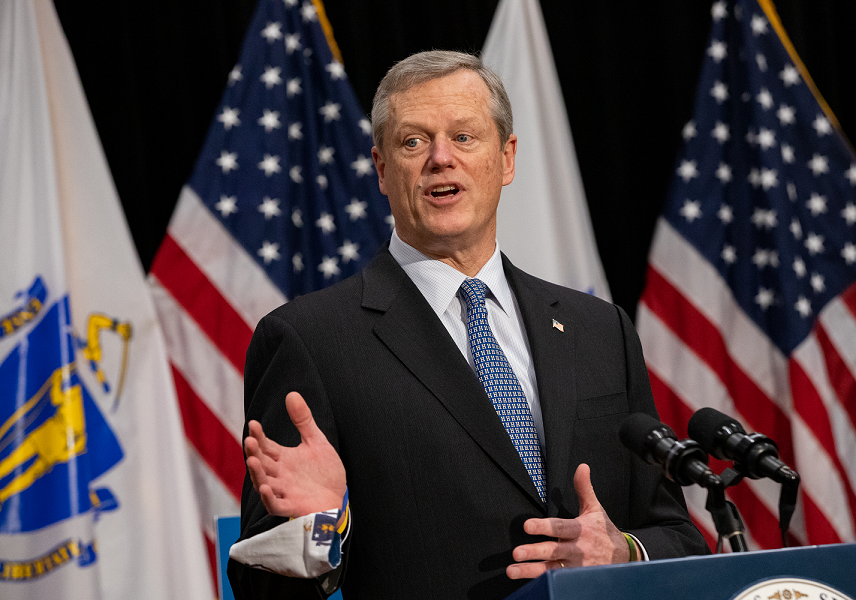 SEPT. 19, 2022…..In the days since two charter planes full of asylum seekers from Venezuela landed on Martha’s Vineyard at the behest of Florida Governor Ron DeSantis, the situation remains at top-of-mind for many on Beacon Hill.

Lawmakers have called for federal investigations into DeSantis and Florida’s use of taxpayers’ money, and Gov. Charlie Baker made an argument Sunday for “meaningful immigration reform.”

The roughly 50 migrants were given the option to move from the Vineyard to Joint Base Cape Cod on Friday, dormitory-style living spaces have been set up, and the Massachusetts Emergency Management Agency is providing food, language interpreters, physical and mental health care, counseling and legal services for the unexpected arrivals. Gov. Charlie Baker activated up to 125 Massachusetts National Guard personnel for the effort.

After claiming credit for sending the migrants to the island, DeSantis on Thursday said, “We are not a sanctuary state, and it’s better to be able to go to a sanctuary jurisdiction, and yes, we will help facilitate that transport for you to be able to go to greener pastures. Every community in America should be sharing in the burdens. It shouldn’t all fall on a handful of red states.”

Baker addressed the situation for the first time outside of a written statement on Sunday at a press conference in Boston on the reopening of the Orange Line and Green Line Extension.

Responding to a reporter’s question about whether he had spoken to Gov. DeSantis, Baker said, “Any conversation with any governor doesn’t really get me anywhere.”

Baker went on to say that there are “constantly” people coming into Massachusetts with “varieties of immigration status,” and that the state does everything it can to help them. In this case, he said he was proud of the way the people in Martha’s Vineyard came together to help the migrants.

A statement from his office on Sunday said, “all immediate needs of shelter clients are being met,” and said unsolicited volunteers and donations could not be accepted at the base.

At the end of his answer to the reporter’s question on Sunday morning, Baker called on federal officials again to write and enforce new immigration policy.

“What really needs to happen here is Washington needs to do its job,” he said. “And its job is to come up with an immigration policy that is enforceable, that works, and that people understand. Because we certainly don’t have that now.”

Meanwhile, Rep. Dylan Fernandes, who represents Martha’s Vineyard, has gone somewhat viral on Twitter over the past week, commenting frequently about the evolving situation to thousands of likes and re-tweets.

On Sunday he used the platform to publicly call for the Department of Justice to open an investigation to “hold DeSantis & others accountable.”

“Not only is it morally criminal, there are legal implications around fraud, kidnapping, deprivation of liberty, and human trafficking,” he wrote.

He followed up on the tweet with an announcement that U.S. Attorney Rachael Rollins is also “pushing for a response from the DOJ.”

A group of U.S. lawmakers representing Massachusetts called on the U.S. Department of the Treasury’s Office of Inspector General on Friday to review the state of Florida’s “apparent misuse of federal pandemic relief funds” from the Coronavirus State and Local Fiscal Recovery Fund, created under the American Rescue Plan Act.

“To execute this political stunt, Florida Governor Ron DeSantis tapped a $12 million program that the Florida legislature created earlier this year to allow the Florida Department of Transportation (FDOT) to ‘facilitate the transport of unauthorized aliens out of Florida,’ ” the letter reads. “Florida then employed this program to relocate the 50 immigrants to Martha’s Vineyard.”

The letter signers wrote that the program is a misuse of COVID-19 relief funds and “violates federal law.” In addition to requesting the Inspector General investigate the state’s use of the funds, they request the office rescind any misused funds from the state’s coffers to “stop this abuse of coronavirus relief programs.”

On the local level, Bourne Public Schools have been in contact with Joint Base Cape Cod to provide education for migrant children currently sheltering on the base.

“While no final decisions have been made regarding the status of the children, the Bourne Public Schools is ready, willing and able to provide a public school education to these children should the need arise,” said superintendent Kerri Anne Quinlan-Zhou in a statement to the News Service.

The school system has taken in refugee students in the past, including students displaced from Hurricane Katrina, who were also housed at the base temporarily.

Quinlan-Zhou said the district offers English as a second language services to any student who might need them, and that these services would be made available to students should they attend Bourne Public Schools.