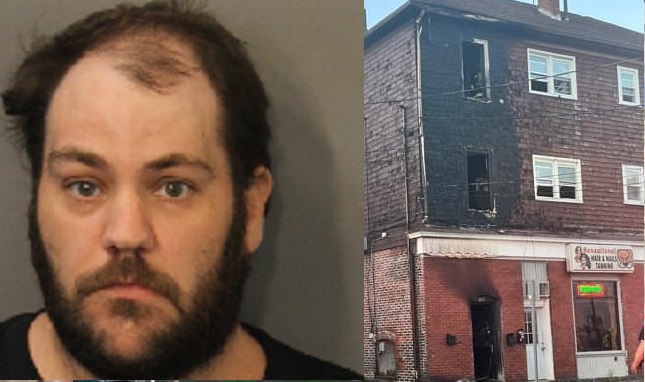 A Fall River man who admitted to setting a fire this week has been held without bail.

According to Sergeant Moses Pereira at approximately 7:22 p.m. on Wednesday, the Fall River Police Department responded to 784 Globe Street for a report of a fire in the hallway. Upon arrival, officers observed flames and smoke erupting from the entrance and stairwell.

The Fall River Fire Department responded quickly to address the working fire. Once the threat of a working fire was addressed, investigators began assessing the cause of the fire.

Investigators quickly suspected that the fire was set intentionally.

Following a joint investigative effort by Detective Nicholas Custadio of the Major Crimes Division, District Fire Chief Neil Furtado of the Fall River Fire Department, and Trooper Mike Fagan of State Fire Marshall’s Office, an arrest was made in connection with the incident.

42-year-old Jeremy Perreira of Fall River was arrested and charged with Arson of a Dwelling and Possession of a stun gun.

A woman and young child were rescued from the flames by members of the Fall River Fire Department.

According to WJAR, a prosecutor stated in court Friday that Perriera was helping the woman with errands on Wednesday when he then made romantic advances, but he was turned down. Perreira then confessed to setting a stroller on fire as he left the building.

Perreira is reportedly being held without bail.