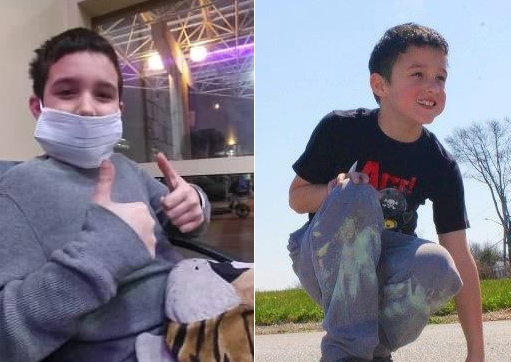 Shawny Smith is 10 years old, from Tiverton, RI. He has a passion for football, plays for the Sakonnet Schooners , and his favorite football team is the Philadelphia Eagles, despite living in Patriots Nation. He loves Marvel Movies, his favorite super hero is Doctor Strange (because of his brain!), he loves Math, Puzzles, Pandas, and his favorite Youtuber is SloGoMan. He is your every day 10 year old boy, who teachers adore and coaches love. He’s the best big brother, fun little brother, and amazing son. He lights up a room with his personality, but on December 28th, he was taken to Hasbro Children’s Hospital for what they thought at the time was small seizures. After a long list of tests, and days in the hospital, the doctors found an abnormal mass on Shawny’s brain and he was to go in for a biopsy. A week later, he was released from the hospital to wait for the results of his test at home.

Shawny’s mom found out the worst news a parent can hear. He was diagnosed with Gliomatosis Cerebri, Malignant. Which is a rare and very aggressive form of cancer. They are often very resistant to treatment. 26-52% of people diagnosed don’t make a year after symptoms start. Shawny is going to be starting radiation treatments, and other alterative forms of medicine since the cancer is so aggressive that not many treatments are options. Surgery is not an option as well as the mass is covering too much of his brain and he would not survive what they would have to remove.

Through all of this Shawny remained positive, up beat and his charismatic self. Guessing the nurses ages and predicting football games. He was amazing all of us, so he was dubbed Super Shawny. He has been a superhero since he was born, he was fighting his way out of the NICU as a newborn, and now he’s fighting cancer.

During this whole process, Shawny started to make a list, which was inspired by the Youtube video and song “Tour of the states” as sort of his “bucket list”. Since we don’t know how much time Shawny has, his Super Hero Squad has assembled to make this list a reality. As you can imagine, this list, while some of it can be free or pretty local, is going to cost a lot of money. Shawny’s mom Monica has 4 children, 3 who she cares for. She works hard and is taking care of everything she can with the help from her friends and family. With taking time off of work because of Shawny’s illness, and just regular day to day expenses, doing this list for Shawny alone is hard. This is where the help from friends, family and amazing people come in.

So we are asking for some help. We’ve set up a GoFundMe page to help with expenses for Shawny’s list. We are also asking for help in different ways such as places to stay or if anyone knows anyone who works at some of the places Shawny wants to see. Anything to help Shawny get through this list. You all can help, by sharing Shawny’s story, his journey and his list, hopping it can reach out to people who can make Shawny’s dreams a reality.

We want to help Shawny do his list, be the super hero we know he is, and see the places he should see in his lifetime.

Shawny told us, “Iron man KNEW the outcome of the fight, but he still gave us the best fight of his life, mine will be better.” and we wanna help him win that fight.

Though he is still currently making his list, here is some of Shawny’s list consisting of a bunch of travel, and also some amazing life experiences, which include: