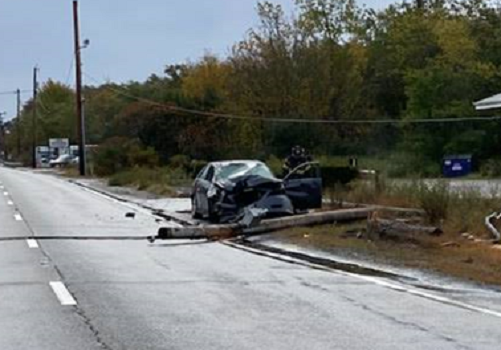 A crash occurred this morning due to distracted driving, according to police.

According to Detective Sergeant Christopher Dunn, at approximately 9:48 a.m., the Westport Police Department received several E-911 calls regarding a single vehicle crash on State Road (Route 6) by Route 88. Preliminary reports indicated live wires were down across the roadway.

When officers arrived on scene, they observed a gray Toyota Camry facing west, with the front windshield shattered and heavy front end damage. A preliminary crash investigation by Officer Scott Davis revealed the Toyota Camry was traveling east on State Road when it struck a utility pole shearing it completely off. When questioned at the scene, the driver could not elaborate about striking the utility pole and told the Officer he looked down and the next thing he saw was the pole before the crash.

The operator of the vehicle was transported to St. Anne’s Hospital with apparent minor injuries.

Police stated that it is believed that inattention by the operator is to blame for the crash.

This is the same area where a motor vehicle crash occurred on September 13, 2020 where a 10-year-old girl suffered fatal injuries.

Dunn wants to warn the public about inattentive and distracted driving.

“Inattentive driving may include acts such as eating in the car, using a cellular device, loudly playing music, applying makeup, smoking, or dealing with a needy child. Any of these things may cause distraction from the road, rendering the driver ineffective in the event of danger.”

“Some tips to avoid inattentive driving would be to use your cell phone for emergency situations only. If you are drowsy, pull off the road. You should limit the number of passengers, as well as the level of activity inside the car. Avoid eating while driving, and do your multi-tasking outside the car.”