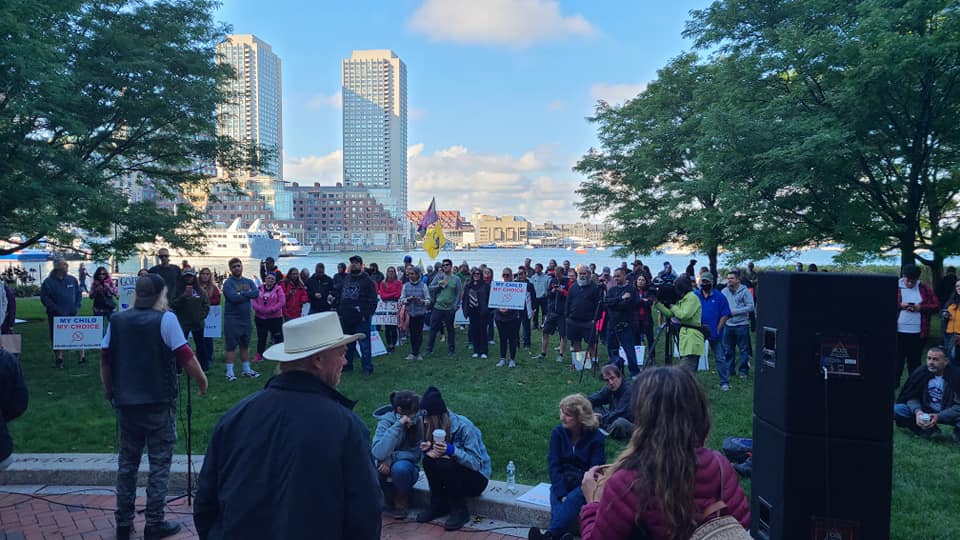 Hundreds of people arrived at the Boston federal courthouse at 1:00 p.m. Monday to protest the flu vaccine mandate by Governor Baker.

FLU YOU BAKER, a group led by Vincent Delaney, filed a class-action lawsuit against Baker, and the State of Massachusetts, over the Massachusetts Department of Public Health’s requirements for school flu vaccinations and protested that mandate today.

The group believes that the mandate is unconstitutional and government overreach and is awaiting a judge’s decision on their filing. Their counsel stated today that the verdict could come soon or it could take a month.

Over $72,000 has currently been raised for the legal bills expected to be incurred concerning the lawsuit.

On August 19th, State public health officials announced that influenza immunization will be required for all children 6 months of age or older who are attending Massachusetts child care, pre-school, kindergarten, K-12, and colleges and universities.

Students will be expected to have received a flu vaccine by December 31, 2020 for the 2020-2021 influenza season, unless either a medical or religious exemption is provided.

No Mandatory Flu Shot MA, a group who partnered in the initial protest and is also reportedly involved in the upcoming protest, issued a statement as to why they are against the requirement.

“Medical decisions belong between a patient or parent and their physician and parents should be able to weigh risks and benefits of medical interventions for their children, without coercion or discrimination and without the threat of loss of access to education, which is a public health threat in its own right. Bodily integrity and free and informed consent for all medical procedures is a bedrock of medical ethics and paramount in a free society.”

“At a time when our country and Commonwealth are grappling with realities of institutionalized disadvantage and discrimination, we are enacting yet another policy that may further marginalize vulnerable populations.”

Last week in a press conference, Baker asked residents to get influenza vaccinations to minimize the impact the flu could have on the community, especially due to the COVID-19 pandemic.