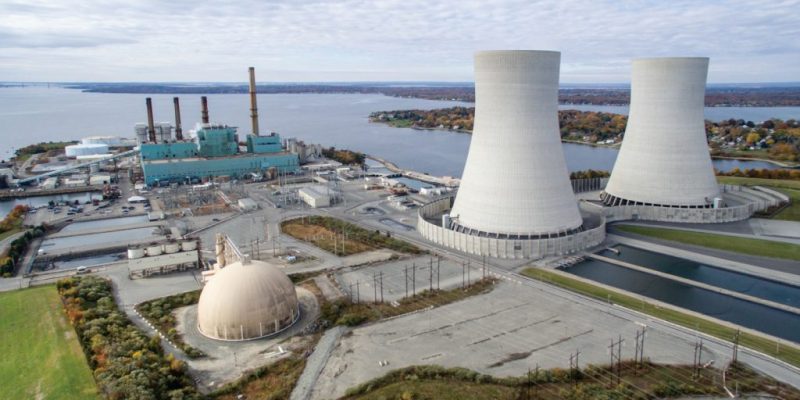 The central element of the Renewable Energy Center is a 1200-megawatt (MW) high-voltage direct current (HVDC) converter – an investment estimated at $250 million – to serve the emerging offshore wind industry. In addition, Anbaric will commence development of 400 MW of battery storage on site, which would bring an additional $400 million in investment. “The Renewable Energy Center represents Anbaric’s broader vision for its Massachusetts OceanGrid project: high-capacity transmission infrastructure to maximize the potential of the region’s offshore wind energy resource,” said Edward Krapels, CEO, Anbaric. “As Massachusetts considers harnessing more offshore wind, the right infrastructure needs to be envisioned and set in motion. An HVDC substation is an important piece not only for Brayton Point Commerce Center, but also Massachusetts’ status as a leader in offshore wind.”

Late last month, CDC imploded two massive cooling towers at Brayton Point and set the stage for a new era of renewable energy development on the South Coast. “Developing a landing point for 1200 MW of offshore wind at the site of a former coal plant physically and symbolically represents the transformation from fossil fuels to wind,” Krapels continued. “While the South Coast has lost a coal plant, it’s quickly becoming the nexus of a new clean energy economy and emerging as one of the great energy stories in the world. This agreement is a symbol of the change that’s coming – and it promises to be a very powerful economic driver in the region.”

“As our country marches towards a clean energy future, our Commonwealth’s workers and businesses can be found standing on the frontlines along the South Coast,” said Congressman Joe Kennedy III. “By reimagining and rebuilding Brayton Point to meet the needs of our emerging offshore wind industry, the Anbaric Renewable Energy Center will not only strengthen our local economy, it will help us confront the effects of climate change already threatening our coastal communities.”

“We welcome Anbaric’s decision to locate at Brayton Point,” said Rep. Patricia A. Haddad (D-Somerset), Speaker Pro Tempore of the Massachusetts House of Representatives. “I am very familiar with the company and have been working with them since drafting the state’s original offshore wind legislation in 2016. I know they will be an integral partner in our overall clean energy strategy for the South Coast.”

“The Anbaric Renewable Energy Center and the ongoing work at Brayton Point by the Commercial Development Company represent extremely important news for the South Coast,” said Senator Michael J. Rodrigues (D-Westport), chair of the Senate Ways and Means Committee. “The transformation of Brayton will give the region a key role in Massachusetts’ clean energy future. It promises to benefit the environment while generating jobs and much-needed local tax revenue.”