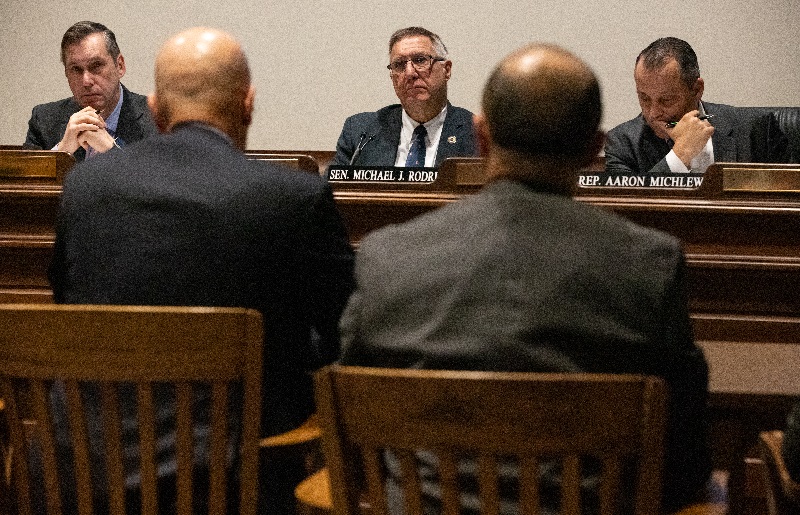 STATE HOUSE, BOSTON, JAN. 24, 2023…..State tax revenues have grown at a torrid pace, surging nearly 40 percent, over the last two fiscal years. But while that sharp upward trajectory is not expected to continue, analysts and economists mostly agreed Tuesday that Beacon Hill can count on collections to remain at their elevated levels over the next year and a half with growth slowing back into the low single digits.

The buzzword that came out of the annual consensus revenue hearing Tuesday, held to help state budget writers estimate the revenues that will serve as the foundation of forthcoming fiscal year 2024 budget plans, was “slowcession.” Not an outright downturn, but a definite handbrake on the eye-popping increases of recent years.

Most of the estimates for fiscal year 2024 revenue growth hovered at or around 1 or 1.5 percent over the current budget year, with some extending to or above 5 percent in the most optimistic forecasts.

Armed with the testimony they heard Tuesday, House Ways and Means Chairman Aaron Michlewitz, Senate Ways and Means Chairman Michael Rodrigues and Administration and Finance Secretary Matthew Gorzkowicz must agree on a revenue estimate for fiscal year 2024, which starts July 1, by the end of the month. That figure will be the basis of Gov. Maura Healey’s first budget, due March 1, and the House and Senate spending plans that will follow.

“I know I speak for my colleagues when I say that we are excited to get to work with the new Healey-Driscoll administration and with Secretary Gorzkowicz. With managing record-breaking surpluses alongside my counterpart, Senator Rodrigues, over the past four years, we’ll all know who to blame if it doesn’t continue going forward,” Michlewitz joked at the start of the hearing. “All kidding aside, predicting future revenue figures can be a difficult process in normal times. Given the volatile economy we find ourselves in, this will be an especially challenging endeavor.”

After the hearing, Rodrigues said that he thinks the steps the Legislature and Baker administration took in recent years have put the state in a good position to reacclimate to single-digit revenue growth in the coming years.

“We are prepared for that. We’ve made some good fiscal decisions in prior fiscal years by putting money into transitional escrow accounts and reserve funds. So I think we’re well-positioned should we enter a stagnant phase,” he said. “But we are seeing the predictions were, about 1 to 3 percent increase in revenues for next fiscal year, which I think provides a good foundation for us to build a budget upon going forward.”

Michlewitz added that Beacon Hill has “made pretty prudent fiscal decisions over the last couple of years, I think, and put us in a position to weather any potential storm we may have coming in.”

Revenue Commissioner Geoffrey Snyder said that the Department of Revenue forecasts that fiscal year 2024 state tax revenue will fall within a range of $39.838 billion to $41.017 billion. That would represent between 0.2 percent and 1.3 percent growth from the agency’s fiscal 2023 forecast, Snyder said. If revenue from the state’s new income surtax were to be included, Snyder said DOR’s fiscal 2024 forecast would be for between 3.2 percent and 5 percent growth based on its fiscal 2023 forecast.

Doug Howgate, the president of the Massachusetts Taxpayers Foundation, said he projects that fiscal year 2024 state revenues will come in at $40.06 billion, an increase of $366 million or about 1 percent over fiscal 2023.

“There are numerous cross-currents that affect the forecast, including healthy withholding and sales tax revenues offset by significant declines in non-withholding revenues due to reduced capital gains taxes and $1.5 billion in state paybacks due to pass-through entities,” MTF wrote in prepared remarks. “It should not surprise that this forecast comes with several caveats.”

MTF’s estimate does not include any revenue from the state’s new surtax on household income above $1 million. Howgate added, “FY 2023 and FY 2024 present unique challenges for a reliable estimate given the unknowns surrounding surtax revenues.”

Evan Horowitz, executive director of the Center for State Policy Analysis at Tufts University, estimated that fiscal year 2024 state tax revenue will land at $40.2 billion, about 1.5 percent above the current year’s benchmark.

That estimate, Horowitz said in prepared remarks, is based on a predictive model that shows a “nearly one-to-one correlation between national GDP and Massachusetts tax revenues” and U.S. GDP estimates from numerous sources.

“Gathering these together, we find a general consensus for a ‘slowcession’ through the middle of 2024, where the growth rate of the economy flags but doesn’t collapse,” he said.

Michael Goodman, a professor of public policy at the University of Massachusetts Dartmouth and editor at MassBenchmarks, also referred to a “slowcession” in his testimony to the budget managers.

“In other words, a relatively soft landing as the state and national economies continue to find a new equilibrium in the wake of the pandemic and its aftermath,” he said.

Northeastern University economist Alan Clayton-Matthews pegged fiscal year 2024 revenues at $42.224 billion, 7.7 percent above his fiscal year 2023 forecast. He said that his estimates assumed that the Federal Reserve Bank “is not going to be able to engineer a perfect soft landing, but neither will it engineer a crash.”

Clayton-Matthews said that what he thinks is more likely is a “mild slowdown or downturn; I don’t think it’s steep enough to really be classified as a recession.”

Gov. Baker’s administration left office with an estimate that the state will collect $39.618 billion by the end of fiscal year 2023, which runs through June. That would be a drop of almost 4 percent from the $41.105 billion that was hauled in during fiscal year 2022, a year in which state tax revenue surged so high compared to wage growth that it triggered a long-forgotten tax relief law.

The new Healey administration could elect to mark up this year’s revenue estimate in the coming weeks or months, but there was not widespread agreement Tuesday on whether that would be prudent — estimates ranged from slightly surpassing the benchmark to a $1 billion budget shortfall.

MTF said it expects this year’s revenues to just barely rise above the current benchmark and suggested that the administration mark up the revenue estimate by $75 million.

“Now, even though we’re $1.1 billion above benchmark, we’re suggesting only a modest upgrade in ’23 and there’s really two reasons for that,” Howgate said. “One, we know from long history that what happens in the first six months of a fiscal year doesn’t often have a lot to do with what happens in the second six months. And we also know that 60 percent of our revenues, typically, are collected in the second six months. And so I think as we look at that $1.1 billion — absolutely a chance that that number grows in the second half of ’23. But if you were to kind of balance risk factors, I think the smart money would be on us reverting to benchmark over the next six months, just going off of historical averages and what we’ve seen.”

Horowitz said that he anticipates final fiscal 2023 tax collections to be in the range of $38 billion to $38.5 billion, well below the current benchmark. Collections so far this budget year, he said, “are less cheering than they might seem from monthly reports” due to the impact of inflation and a benchmark that was set based on “overly-optimistic” expectations about inflation.

“In real, inflation-adjusted terms, we are meeting, but not exceeding, the current benchmark for FY 2023 tax revenues. And these inflation-adjusted numbers are what really matter, because they reflect the reality that virtually all of the activities of state government have gotten more expensive, whether it’s hiring people, procuring materials, providing housing support, or a great deal besides,” he said.

Horowitz added, “What is more, our modeling suggests that even ignoring the impact of inflation we are likely to end this fiscal year with a revenue shortfall of roughly $1 billion. The decisive factor will be April collections, where we fear the monthly benchmark is overly optimistic given the collapse of financial assets in 2022.”

After Tuesday’s hearing, Gorzkowicz reiterated that 60 percent of annual collections come in during the second half of the fiscal year and said he wants to see January revenues (which are due from DOR by Feb. 3) before making any decision about adjusting the year-end expectation.

“I think we need to be cautious. I don’t think that we’re looking at increasing the benchmark by the billion dollars that we’re over, by any means, and I think we have to see how January, which is another big month, is coming in before we make any determinations about what to do with ’23,” he told reporters. “But I think we need to be cautious as we look at the second half of the year where the largest amount of tax collections are, and understand how much of that might be timing that we’re seeing in the first half of collections.”