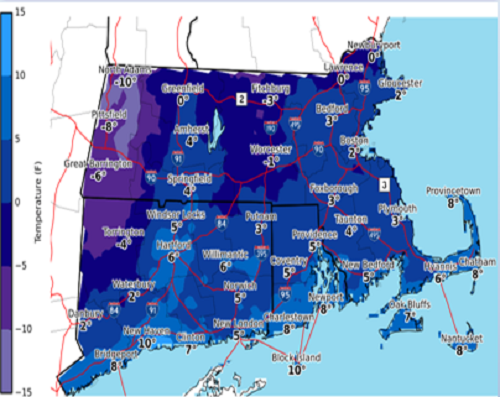 According to the National Weather Service, a Wind Advisory has been issued as strong winds and cold temperatures are headed our way with some snow mixed in.

Portions of northern Connecticut, central, eastern, northeastern, southeastern and western Massachusetts and northern and southern Rhode Island have been issued the advisory from 10 AM Thursday to 1 AM EST as northwest winds of 15 to 25 mph with gusts up to 50 mph are expected into Friday morning.

Gusty winds could blow around unsecured objects. Tree limbs could be blown down and a few power outages may result. 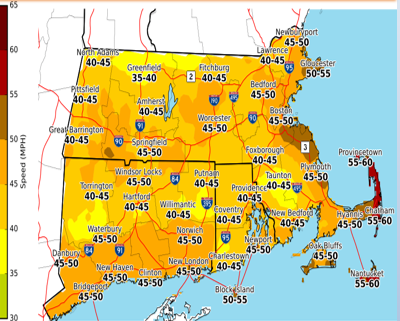 Wind chills between 5 below and 5 above zero are expected into early Friday morning.

Snow and rain are also headed our way this weekend.

Today
Rain likely, mainly before 9am. Patchy fog before 11am. Otherwise, mostly cloudy, with a high near 43. Breezy, with a south wind 5 to 10 mph becoming west 16 to 21 mph in the morning. Winds could gust as high as 38 mph. Chance of precipitation is 60%. New precipitation amounts of less than a tenth of an inch possible.

Tonight
Partly cloudy, with a low around 17. Northwest wind around 18 mph, with gusts as high as 33 mph.

Friday Night
Mostly clear, with a low around 4. Wind chill values as low as -3. Northwest wind 5 to 10 mph becoming light after midnight. Winds could gust as high as 20 mph.

Saturday
Snow likely, mainly after 4pm. Mostly cloudy, with a high near 32. Calm wind becoming south around 6 mph in the afternoon. Chance of precipitation is 60%. New snow accumulation of around an inch possible.

Saturday Night
Rain, snow, and sleet before 3am, then a slight chance of rain between 3am and 4am. Low around 30. South wind 7 to 9 mph becoming southwest after midnight. Chance of precipitation is 90%. New snow and sleet accumulation of 1 to 3 inches possible.