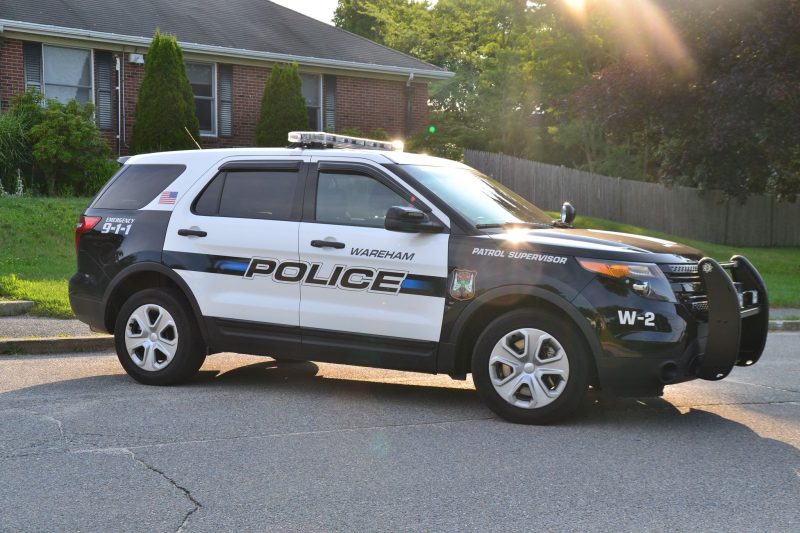 On Monday, October 8, at about 8:00 p.m. Wareham Police officers were dispatched to the area of 261 Great Neck Road for report of a loud crash and people yelling for help. It appeared that the yelling was possibly coming from the water. Officers James White and Blaise Lalli arrived in the area and began to search for anyone in distress. The officers went to the Stony Point Dike and could hear multiple people screaming for help in the water, on the Cape Cod Canal side of the dike. The officers could see two people struggling and could hear multiple other people yelling for help but could not see them.

​Officer White jumped in the water with a life jacket and throw ring and was able to save the two people bringing them to shore. Officer Lalli proceeded further down the dike to try and locate the other parties and determined that three additional people were clinging to a channel marker buoy. Officer Lalli was able to relay that information to the responding Wareham Natural Resources boat. The DNR boat, staffed by Harbormaster Garry Buckminster and Lt. Justin Harrington of the Onset Fire Department were able to rescue these three off of the buoy. It appears there were only minor injuries among the five. It was later determined a vessel owned by Andrew Murray of Mattapoisett, struck a buoy marker throwing the five individuals into the water. Mr. Murray was one of those taken off of the buoy. The accident is under investigation by the Massachusetts Environmental Police.

​ Acting Police Chief John Walcek praised Officer White by saying, “Officer James White risked his life tonight by jumping in the ocean without hesitation, saving two lives. The individuals in distress were over a 120 feet from shore, coupled with the strong canal current, and darkness made the rescue of these two people miraculous. I am extremely proud of his bravery under adverse conditions.”

​ Walcek added, “Officer Lalli was prepared to enter the water where the other cries for help were coming from until it was realized that they were clinging to buoy. The cooperation and coordination between the multiple agencies involved, made this night end without any loss of life. Wareham is indeed lucky to have such dedicated public servants. Furthermore, it should be added that these rescues would not have happened if it was not for the concerned residents who called 911 and began checking the area.”