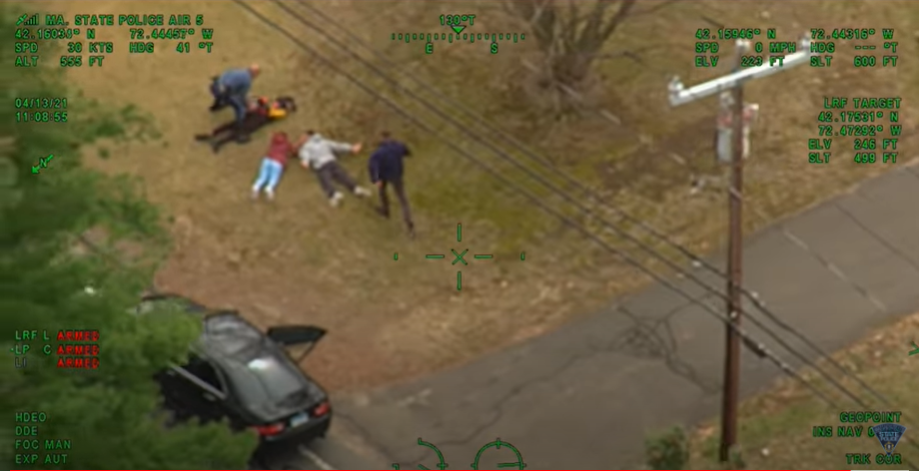 In the end, they couldn’t shake the Massachusetts State Police air crew, so they surrendered to them.

According to Massachusetts State Police, shortly before noon Tuesday, Trooper Brian Gervais, assigned to State Police-Sturbridge, was stationary observing traffic on Route 84 eastbound in Sturbridge. At that time he observed a black Acura sedan pass his location with no front license plate. Trooper Gervais entered traffic and proceeded to catch up to the vehicle. As they approached Exit 3 the Acura made erratic lane changes, cutting off other motorists, and exited Route 84. Trooper Gervais followed the vehicle and observed it make an illegal U-turn to again enter Route 84 eastbound. He immediately activated his cruiser’s emergency lights and siren in an attempt to stop the vehicle.

The Acura refused to stop at which point Trooper Gervais notified all area cruisers and stations that he was in pursuit of the vehicle. During pursuit Trooper Gervais observed the two front seat occupants switch places while the vehicle was moving. A short time later the Troop Duty Officer ordered termination with follow up investigation in an attempt to identify the occupants. The State Police Air Wing was monitoring communications and advised they had a visual of the vehicle.

While Air 5 was observing the Acura from a distance the operator continued to disobey traffic laws with no cruisers in pursuit. However, the vehicle eventually stopped and all parties exited surrendering to the Air Wing. Multiple cruisers arrived on scene and quickly took two of the vehicle’s occupants into custody. A third occupant was released from the scene without charges. They were transported to the Sturbridge Barracks and were booked on the following charges.

1. Reckless Operation of a Motor Vehicle;

2. Leaving the Scene of a Property Damage Crash;

3. Failure to Stop for Police;

4. Negligent Operation of a Motor Vehicle;

7. Unlicensed Operation of a Motor Vehicle;

1. Reckless Operation of a Motor Vehicle;

2. Leaving the Scene of a Property Damage Crash;

3. Failure to Stop for Police;

4. Negligent Operation of a Motor Vehicle;