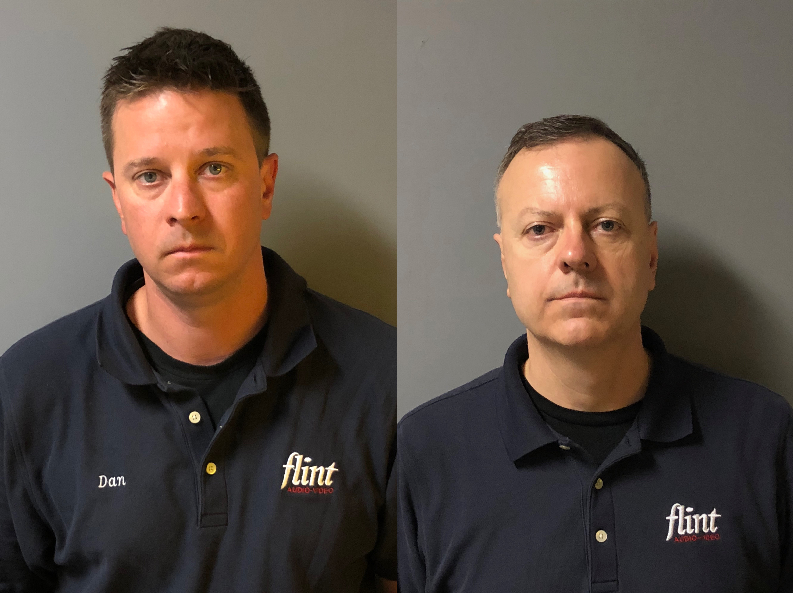 Colonel Ann C. Assumpico, Superintendent of the Rhode Island State Police and Director of the Department of Public Safety, announces the arrests of the Flint Audio-Video owners for allegedly soliciting a Flint Audio-Video employee to illegally access and share nude images found on customers’ cell phones and computers.

Gary W. Gagne, age 58, of 50 Intrepid Lane, Jamestown was arrested by members of the Computer Crimes Unit at the Flint Audio-Video Middletown store at approximately 10:00 a.m. today. He was charged with:

Daniel A. Anton, age 35, of 2 Laurel Lane, Jamestown was arrested by members of the Computer Crimes Unit at the Flint Audio-Video Middletown store at approximately 10:00 a.m. today. He was also charged with:

Gagne and Anton were both arraigned at Second Division District Court by Associate Judge Hastings and released on $30,000.00 personal recognizance with a special bail condition of limited internet use.

The investigation showed that both Gagne and Anton conspired with George Quintal, a Flint Audio-Video employee recently arrested on similar charges. The alleged victims brought their computer, cell phone or other electronic device to Flint Audio-Video for repair and Mr. Quintal would allegedly search the electronic files on those devices, without the victims’ knowledge or consent. Mr. Quintal allegedly took photos of nude images found on these devices and shared them with Mr. Gagne and Mr. Anton without the victims’ knowledge or permission.

Based on this investigation, members of the State Police Computer Crimes Unit obtained arrest warrants for Gary Gagne and Daniel Anton.

Rhode Island State Police have identified several of the alleged victims found in these photos and videos, but they are still working to identify others.

Any customers of Flint Audio-Video who are concerned that their photographs and other electronic files may have been compromised should contact Detective Adam Houston at 401-921-8152.