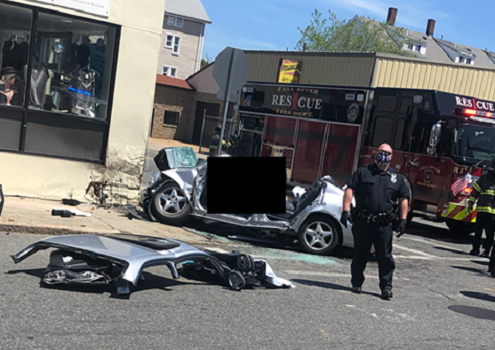 A serious crash in Fall River early this afternoon has claimed the lives of at least two people.

Just before 12:30 p.m., a call came into dispatch for a car into building with airbag deployment.

According to Gregg Miliote of the Bristol County District Attorney’s Office, an Acura 3.2TL was traveling north on Second Street when it appears to have clipped the curb, lost control and struck Finders Keepers at 427 Second Street.

The two rear seat passengers, a 23-year-old Fall River woman, and an 18-month-old boy, were transported to the hospital for treatment of injuries. The woman is awake and alert at the hospital, while the baby is in serious but stable condition, according to Miliote.

According to Miliote, no other vehicle or pedestrians were involved.

Accident reconstruction and the investigation is ongoing. ​