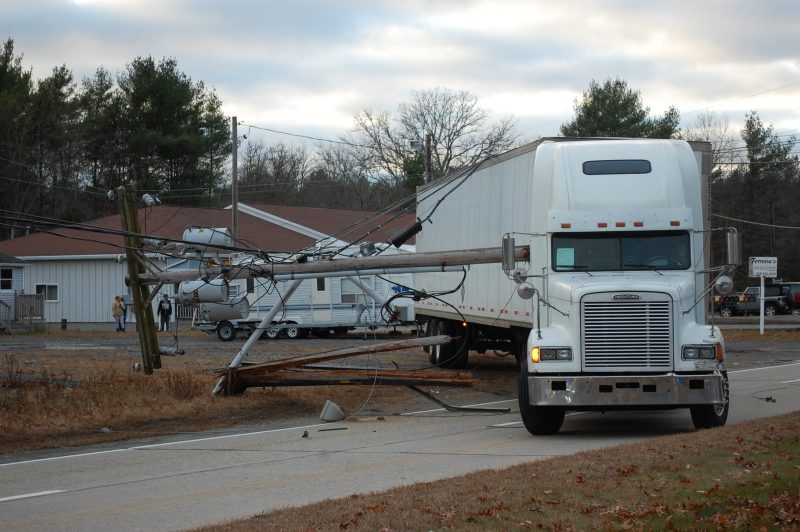 A tractor trailer crash on Tuesday shut down a major road for hours and also knocked out power to the area.

According to Detective Sergeant Christopher Dunn, the Westport Police received several calls regarding a motor vehicle crash located at 1119 State Road, Westport. The involved vehicle was reported to be a tractor trailer unit. As a result of the crash, a utility pole had been severed and electrical wires were positioned over the truck and onto the roadway.

Responding Officers observed the tractor trailer unit partially in the eastbound lane with electrical wires across the trailer. Both the operator and passenger were instructed to remain in the cab until utility company personnel arrived to determine the status of the power lines.

Once the scene was determined to be safe, both parties were evaluated at the scene and signed medical waivers.

A preliminary investigation by Officer David Arruda revealed the operator, Joshua Butler, 44, of Reidsville, Georgia was operating a 2000 Freightline onto State Road (Route 6). As he attempted to enter the roadway, the tractor trailer struck a guy-wire. This caused the pole to be shifted in the ground and become severed at two locations. The upper portion of the pole which was still connected to the utility lines and cable/telephone lines came to rest against the truck. This caused the electrical wires to fall onto the trailer and the roadway.

As a result of the crash, a section of State Road eastbound was closed for several hours. There were reported outages to several local businesses and residences. Eversource Energy and Verizon Telecommunications arrived on scene to replace the severed pole and restore power to the area.