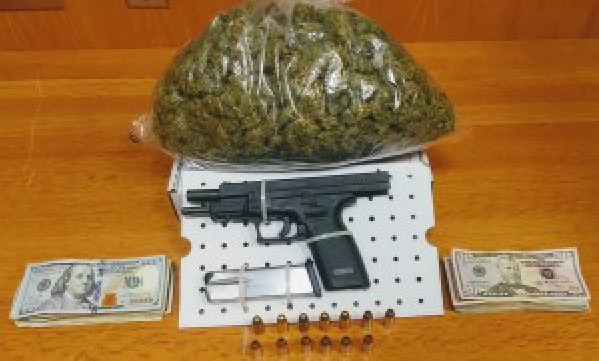 A 27-year-old Roxbury man with two prior illegal firearm-related convictions who was arrested last February in Fall River with a loaded firearm strapped to his ankle was convicted of a third offense firearm-related crime in Fall River Superior Court this week and sentenced to serve seven to nine years in state prison, Bristol County District Attorney Thomas M. Quinn III announced.

According to Gregg Miliote of the Bristol County District Attorney’s Office, Jaymes Williams pleaded guilty to indictments charging him with carrying an illegal firearm-third offense, carrying an illegal high capacity firearm and possession with intent to distribute a class D drug.

On February 9, 2018, two Massachusetts State Police troopers were on routine patrol in the City of Fall River when they observed a 2018 Dodge Charger operating on Branch Street with no working tail lights or license plate lights. The troopers stopped the vehicle and made contact with the operator and his passenger (this defendant). Prior to making contact with both men, the troopers noted an overwhelming odor of unburnt marijuana emanating from the interior of the car. One of the troopers asked the driver about the odor and the driver showed the trooper a small bag of a green leafy substance consistent with marijuana. As this was happening, the second trooper observed a large bag of marijuana in plain view on the floor board behind the passenger seat. This large bag was later weighed at the state police barracks where troopers determined it weighed approximately one pound.

Based on all of the marijuana and the large bag in the back seat, the troopers asked both men to exit the vehicle. While this defendant was being taken into custody, troopers discovered a loaded .45 caliber semi-automatic firearm just above the defendant’s shoe. That weapon was made safe and it was later determined that one round was in the chamber and 12 addition bullets were in the magazine, making it a high capacity firearm.

The case was prosecuted by Assistant District Attorney Jason Mohan and the state prison sentence was imposed by Judge Thomas McGuire.

The defendant has two prior firearms convictions from Suffolk County and Plymouth County.

“This is another example of the dangers police face when executing a routine motor vehicle stop. The defendant, who has two previous firearm convictions, had a loaded gun that contained 13 bullets strapped to his ankle. This defendant obviously will not obey the law and presents a clear danger to law enforcement and the community. The defendant, who has no known ties to Bristol County, was clearly up to no good,” District Attorney Quinn said.