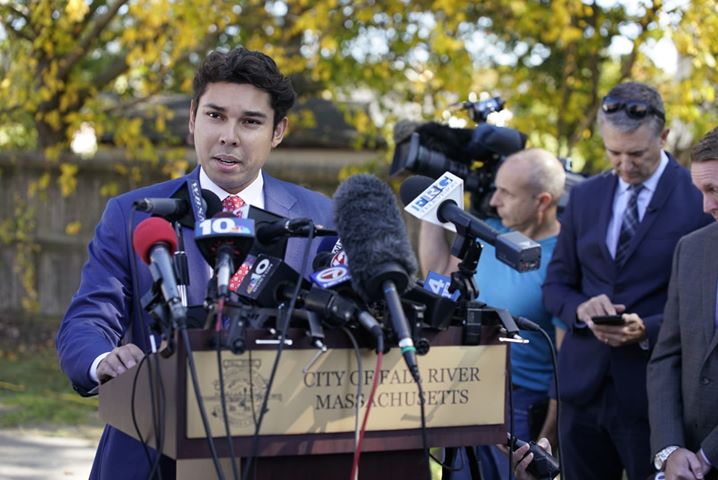 I am here today to officially announce my decision to forego my campaign for re-election as Mayor of Fall River and take a temporary absence from my fiscal responsibilities as mayor. Those duties will now be handled by our City Council President.

I will continue as Mayor of Fall River until January first, 2020 and will focus my attention on championing and supporting many of the impactful social programs that I have established during my administration.

Today’s announcement provides for the City of Fall River an opportunity to build on the successes and accomplishments of my administration without any distraction. This announcement allows the voters, who will take to the polls, the chance to evaluate candidates on policy and platforms not headlines.

The people of Fall River have shown their continuous support for the work that I have done as their Mayor by electing me 3 times, and I will be forever grateful to them. I pledge that I will see that work through and reaffirm their confidence in me.

For every elected official, the goal is to leave the community in which they have served better than they found it. I am very proud to say that we have done that here in Fall River.

Just behind me, construction continues on our new $300 million high school, which will provide innovative educational opportunities for our public school students as well as trade programs to better prepare our young people for the future.

When I first took office here in Fall River, we were a city in rapid decline. But now Fall River stands as a symbol of revitalization and hope.

Before I took office in 2016, the City only had $500 thousand dollars in its stabilization or savings account. Fall River did not have a favorable credit rating and couldn’t even fund our school system.

Teachers, Firefighters and Police officers were being laid off because the City could not meet its financial obligations.

Today – we have a favorable financial outlook and close to $9 million dollars in our Stabilization account to keep Fall River on the right track. We accomplished this in only three and a half years.

It’s one of the fastest economic turnarounds for a Gateway City in the history of the Commonwealth.

As we have rebuilt our finances I also successfully fulfilled two campaign promises to save taxpayers, renters, and homeowners money by eliminating 2 fees; the $120 trash fee and the dreaded Pay-As-You-Throw program which mandated every household purchase city approved $2 bags. Together the elimination of both programs returned nearly $6 million dollars to the people of Fall River annually.

I am the only mayor in the commonwealth to eliminate 2 fees while still creating surpluses and I am proud my team and I have achieved this feat.

We have also transformed our education system during my administration. Before I entered office, hard working teachers received pink slips at the end of the school year because the City could not guarantee that funding would be in place for the following year.

That practice was ended because I committed to meeting and exceeding the school systems requests every year.

We have increased the education budget, added more than 65 positions to the Fall River school department while reducing classroom sizes – and have added tremendous support for English language learners, social and emotional needs, services for special needs students, as well the funding needed to repair our schools that had been forgotten.

Public Safety has also been a top priority of my administration.

We have upgraded the entire fleet of the Fall River Fire Department, including every ladder truck and every rescue truck.

Before my tenure, trucks were 30 years old and would break down on the way to a fire – putting people at risk. Now, for the first time in the history of the City, all the fire equipment is new and state of the art.

That also includes new washers and dryers for fire gear. That seems simple but after learning from our fire union about the dangers of modern fires and the cancer causing carcinogens I felt compelled to do my part in ensuring that firefighters would not get cancer from their vocation.

We increased Fire Department personnel including the hiring of the first female firefighter in the history of the city.

We have increased the police force every single year while I have served as Mayor. My administration has purchased mobile camera units to help our police officers fight crime along with the tools and technology to keep them safe on the job.

Paying tribute to our Veterans, honoring our fallen and thanking our gold star families has been the most important duty I have had. Without such bravery we would not enjoy the freedoms we do each day. Ensuring the protection of monuments, the participation in memorials and the funding of new monuments, like the Vietnam Memorial Wall have all been a privilege and and honor.

Under my leadership, we created a program called Project Re-Connect – which takes all police data from overdoses each month and brings together a team – of counselors, faith leaders and law enforcement to reach out to those individuals who have overdosed to get them the help they need.

We launched a resource center at city hall and sued two of the biggest pharmaceutical companies which will lead to more resources to continue to save lives.

Despite this and many other battles urban communities are facing – The City of Fall River is on the rise. Just look at our downtown area where you can see economic development and growth. When I took office, the downtown area was desolate and businesses were taking chances on our downtown without the commitment of the city.

We have begun to capture the economic boom that drives this great state. We launched streetscapes to make our city more beautiful, pedestrian friendly and safer.

We’ve restored our downtown properties; boutiques and dress stores are blossoming and new restaurants are opening up throughout the city.

Fall River went from no craft breweries to two craft breweries under my tenure. Starbucks and the Southcoast Marketplace has also opened joining a host of incredible coffee startups, amazing bakeries, small and big businesses throughout the North and South ends of our city.

These are positive economic predictors of where the City is headed. Entrepreneurs and global brands are investing in our community for the first time in generations

We have new housing options in our city attracting people from outside and inside our city to move into new housing stock. We slowed the process of low income housing while still ensuring resources are available for those in need of housing assistance in our community. We shepherded the construction or conversion of hundreds of new apartments in mills and even brand new apartments complexes.

Single family homes and home ownership is on the rise as well. We eliminated the King Philip Mill hazard will creating the opportunity for beautiful new homes to be built in its place.

This combined with new roads, better parks and sidewalks, a well funded education system and
transportation options like the new train connection to Boston, which will be rider ready by 2023 have led to an unprecedented amount of new businesses opening and manufactures expanding.

We are no longer a city that simply “Tries”. In fact, “We’ll Try” was the official slogan for Fall River for many years.

Our new motto is – “Make it Here” – which tells the story of so many people who have come and keep coming to our great city to make something of themselves and their family’s.

It’s the story of the immigrant, the business entrepreneur, the basketball legend in the making, the family, the food and the future.

I hope the foundation and framework I am passing on today is used to move the city to even greater heights because that is what people deserve.

I could not have done this without the assistance and support of my valued staff members at City Hall, whose selfless dedication and commitment to the job at hand have brought Fall River to where it is today.

I want to thank my family, friends and supporters those who have watched me grow up in this city and those that have helped me become victorious in this city. At the end of the day Fall River must win, not just any one person. That is why the city, at this time must have an opportunity to continue to thrive and build upon this solid framework and foundation without distraction.

I will never waver in my commitment to the people of Fall River. Today is not goodbye. It’s far from it. Whether serving in an official capacity in elected office or not, I will continue to fight every day to improve the lives of every resident of Fall River and I fully expect to lead this great city on the rise once again as its mayor in the future.

Let us continue to “Make it Here!”