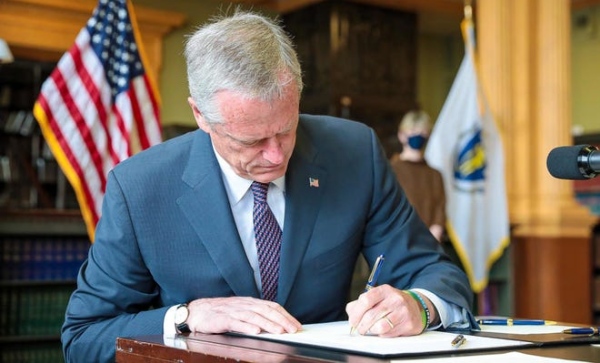 About 3.6 million Massachusetts taxpayers are set to receive cash back this fall after state government hauled in taxes last year that surpassed the legal limit by nearly $3 billion, the Baker administration announced Friday.

Announcing a plan that conflicts with what some Democrat lawmakers expected, Gov. Charlie Baker’s team, which oversees the Department of Revenue, said the $2.941 billion that needs to be returned to taxpayers under a voter-approved law will take the form of mailed checks or direct deposits, likely starting in November.

Taxpayers will “automatically” receive their refunds without needing to submit any application. To be eligible, they must have filed a 2021 state tax return by Oct. 17, 2022.

The amount of each refund will be scaled based on how much someone paid in state personal income taxes in 2021, with larger checks going to those who paid larger shares of the tax haul. Baker’s budget office estimated the refunds will total about 13 percent of how much a taxpayer owed to Massachusetts in personal income tax last year, stressing that figure could change once it is finalized in late October.

“With families facing continued pressure from high prices and inflation, these returns will provide some needed relief,” Baker said in a statement. “Even with nearly $3 billion going back to taxpayers, significant state and federal resources remain, and we look forward to working with the Legislature to invest this funding into our economy, communities and families.”

Bay Staters can use an online calculator the Baker administration launched to get a projection of what to expect.

Massachusetts has a flat income tax rate of 5 percent, so an individual who earned $50,000 in taxable income last year and had a tax liability of $2,500 could be in line for a rebate of roughly $325; toward the top of the scale, a Bay Stater who earned $1 million in taxable income and owed $50,000 in Massachusetts income taxes could face a rebate of $6,500. However, the final amount of each check will depend on variables such as whether a taxpayer claimed earned income credit, senior circuit breaker credit, or dependent credits on their tax return.

Rebates might also be reduced due to refund intercepts for unpaid taxes, unpaid child support or other debts, officials said.

The administration’s implementation plans were rolled out a day after Auditor Suzanne Bump certified that Massachusetts collected $2.941 billion more in taxes last year than the cap set by a voter-approved 1986 law linking tax and wage growth.

“This rebate could not come at a better time,” said Retailers Association of Massachusetts President Jon Hurst. “Inflation has hurt our consumers and small businesses, and putting these tax dollars back in the pockets of the taxpayers will help with high heating and grocery costs, and will put important consumer dollars back into our local economy for the holidays.”

Top Democrats in the Legislature were caught off guard by the emergence this summer of the tax cap, and the news prompted them to toss aside a $4 billion economic development bill that included $1 billion in combined one-time and permanent tax relief.

They have now come around to the reality that the tax relief under Chapter 62F is due, and the Baker administration decided to move forward with its implementation plans even though the Legislature has not approved Baker’s plan to sequester the tax relief money in a reserve fund.

Spokespeople for both House Speaker Ronald Mariano and Senate President Karen Spilka declined to make the top Democrats available for interviews on Friday.

Mariano, who previously accused Baker of failing to alert legislative leaders the tax cap would be triggered, indicated in a statement that he is basically on board with the steps Baker outlined.

“Today’s announcement and timeline is consistent with the Governor’s public statements,” Mariano said. “I’m glad to see the Administration has quickly laid out plans to distribute the money back to taxpayers and I look forward to see(ing) its implementation.”

Not all members of Mariano’s caucus are thrilled with the plan.

Rep. Mike Connolly, a Cambridge Democrat in the Legislature’s progressive wing, said he wants lawmakers to intervene to adjust the distribution formula and steer more of the money to low- and middle-income Bay Staters.

“The fundamental concern here is that at a time where the working class, the middle class, poor people are being absolutely crushed by inflation, we have an administration that is looking to return checks on the order of tens of thousands of dollars to the state’s top income earners,” Connolly said in an interview.

Connolly stressed that he supports returning money to taxpayers this fall, but he wants the Legislature to reconvene to formally authorize distributing checks and to reshape the proportional allocation. The governor’s team says it is following the “proportional” distribution instructions included in the 1986 law.

That measure has been in limbo since Democrats failed to find agreement on their economic development bill when formal sessions for the term ended on Aug. 1, though legislative leaders signaled Thursday they are moving closer to reviving the proposal.

For some taxpayers who were in line to receive $250 checks, the Baker administration’s plan could offer similar relief. Without factoring in credits or deductions, a taxable income of $38,000 could translate to a rebate of $247 using the preliminary projections the administration produced Friday.

Confusion lingered through the summer over how the 62F relief would be returned to taxpayers. In 1987, the only other time the cap was triggered, the state allowed taxpayers to claim a share on their income tax returns the following year.

The text of the law says any excess tax revenue must be returned as a “credit … applied to the then current personal income tax liability of all taxpayers on a proportional basis to the personal income tax liability incurred by all taxpayers in the immediately preceding taxable year.” When she published her report Thursday, Bump said a return of $2.94 billion “in the form of a credit must be effectuated by the commissioner of DOR.”

That’s also the understanding Senate budget chief Michael Rodrigues had when asked Thursday if the Legislature needed to approve a closeout budget Baker filed (H 5260) that partitions $2.94 billion to cover the 62F relief.

“I don’t think so because the law is pretty clear that money is going to go out in the form of tax credits against next year’s tax liability,” Rodrigues said. “The law is pretty clear, in my opinion, if you read the law. So if you’re going to follow the law, which we’re hoping everybody follows the law, then there will be credits next year.”

The Baker administration appears confident, though, that returning cash directly to taxpayers this fall — before Baker leaves office in January — is within bounds. The Executive Office of Administration and Finance’s press release announcing the plan Friday called it “a credit in the form of a refund.”

An administration spokesperson who agreed to communicate only on background said the Legislature does not need to approve the closeout supplemental budget before the tax refunds can flow to Bay Staters. The measure in that bill would allow the refunds to be paid from currently available fiscal year 2022 dollars rather than from fiscal year 2023 dollars, but does not serve as a prerequisite to delivering refunds.