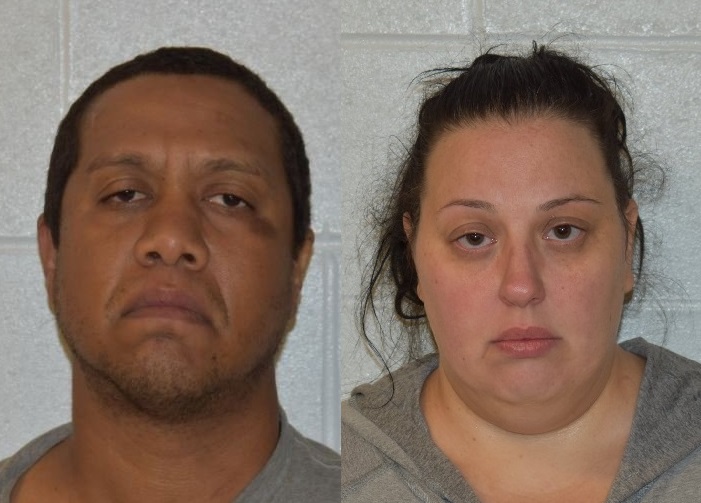 A couple from Massachusetts was arrested after a reported scary scene early this morning.

According to Deputy Chief Robert Kelley, at just after 2:00 a.m. this morning, Officer Fratus of the Hampstead Police Department responded to the Extra Mart located at 416 Emerson Avenue for a reported armed robbery.

Upon arrival, Officer Fratus learned that a man entered the convenience store and committed a robbery, with what was believed to be a firearm. The suspect was seen leaving the area in a dark colored sedan.

5 minutes later, Officer Fratus located the suspect vehicle on Route 111 and a short police pursuit ensued. The vehicle turned onto Hickory Road and pulled into the entrance of a driveway. Upon making contact with the vehicle, a male passenger held a handgun to the operator’s head and threatened to harm the female operator. The vehicle sped off and eluded the officer. The officer noted that the license plate to the vehicle was partially covered up with some sort of material. At this time, several surrounding police departments were responding to the area and began searching for the suspect vehicle.

Just after 2:30 a.m., officers were dispatched to a residence on Wellington Drive for a report of an armed home invasion. It was reported that a suspect had several members of the household held hostage, at gunpoint. Officers arrived on scene and located the suspect vehicle in the driveway. A perimeter was set up and additional resources were requested; this included assistance from several area police departments, New Hampshire State Police and the Southern New Hampshire Special Operations Unit.

On multiple occasions Robles attempted to leave the residence, in the homeowner’s vehicle, while holding a gun to one of the resident’s head. Officers on scene were able to contain the situation and keep the vehicle from exiting the garage area. During the stand-off members of the home were able to flee to safety; to include the homeowner’s children and their grandmother. Knox eventually left the house, and it was at this point officers learned that she was Robles’ fiancé. Knox advised officers on scene that she and Robles were currently homeless. Knox also advised that Robles was currently under the influence of cocaine and “meth”.

At approximately 4:30 a.m., the last hostage in the house was able to flee the residence when Robles reportedly took an unknown number of pills and possibly “passed out”.

With the assistance of a drone, members of the Southern New Hampshire Special Operations Unit were able to enter the house and take Robles into custody without anyone being further harmed. At this time, officers determined that the handgun was actually a BB gun.

Upon further investigation, the Hampstead Police Department alleged that Knox was an actual accomplice to armed robbery. Knox was arrested and charged with Accomplice to Armed Robbery, Disobeying An Officer, and Operating with a Suspended License.