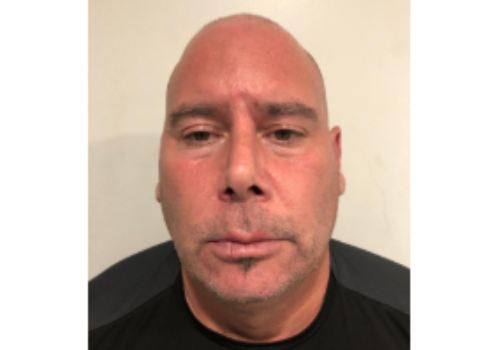 The Rhode Island State Police announce that members of the State Police Computer Crimes Unit, Internet Crimes Against Children (ICAC) Task Force and the State Police Violent Fugitive Task Force (VFTF) have arrested a convicted murderer for three counts of Electronically Disseminating Indecent Material to a Minor and a Parole Board warrant on an original charge of Murder and Robbery.

Christopher M. Rocheleau, age 50, of 78 Esmond Street, West Warwick, Rhode Island was arrested on three counts of Electronically Disseminating Indecent Material to a Minor, after an investigation into an individual allegedly sending indecent sexual material to person, whom he believed to be a 14-year-old boy. As a result of the investigation, members of the ICAC Task Force were able to identify the individual as Christopher M. Rocheleau and obtained a warrant for his arrest. Additionally, Rocheleau had an outstanding Parole Board warrant on an original charge of Murder and Robbery. ICAC Task Force members, with the assistance of the VFTF, took Rocheleau into custody in the City of Providence.

Rocheleau is currently on parole due to a 1994 Murder and First-Degree Robbery investigation conducted by the West Warwick Police Department. Rocheleau plead Nolo Contendre to a charge of Second-Degree Murder and Robbery on June 28, 1995, and was sentenced to 60 years full sentence with 38 years to serve and 22 years suspended sentence. Rocheleau was arraigned at Third Division District before Associate Judge Bucci and was held on $10,000 surety bail with special conditions including no contact with minors and restricted use of the internet. Additionally, Rocheleau was held as a parole violator.