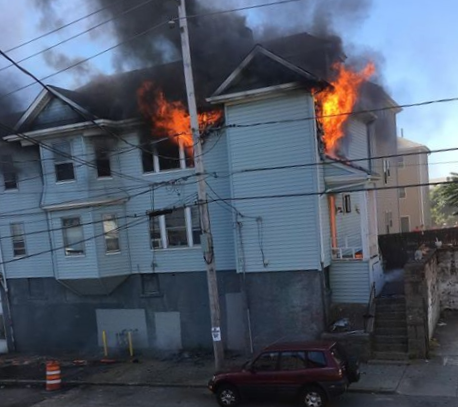 The fire, located at the corner of East Main and Peckham Streets,  came in at approximately 11 a.m.

According to Fall River Fire Chief John Lynch, fire and building inspectors actually discovered the fire in the course of their inspection. The occupants of the dwelling were evacuated just in time. A lucky coincidence that Inspectors Jason Cambell and Todd Young were there. Cambell called the fire in and evacuated. They went back in to get one male out. When they exited, the top floor erupted in flames.

According to the Red Cross, 10 individuals have been displaced at 179 East Main Street.

According to a witness who lives across the street, a dog was brought out unconscious  but was resuscitated after the pet was given oxygen and CPR.

One firefighter was transported to the hospital with a minor ankle injury while fighting the two alarm fire.

The fire is still under investigation.

A clip from the fire is below.