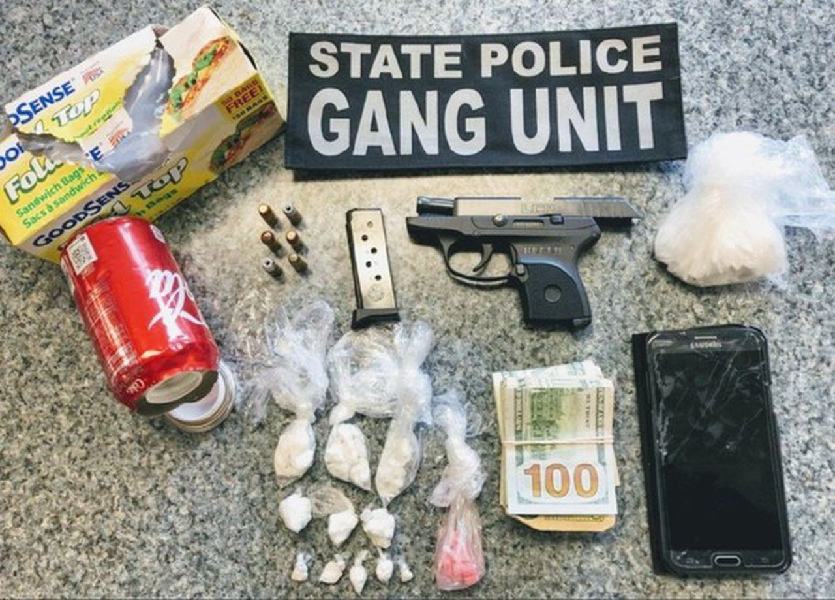 Upon executing the warrant on June 6, the defendant was out front smoking a cigarette but ran back into the apartment when police identified themselves. The defendant ran into a bathroom where his girlfriend’s daughter was using the toilet. Officers located a red Coca Cola can in the toilet with a false top containing numerous plastic twists with a white substance in them (25.46 grams of crack cocaine & 13 red square pills marked “Insta-Gram”).

The defendant then ran out of the bathroom and into the kitchen area. Numerous officers tried to place him into custody but he actively resisted by punching and kicking two of the troopers. After being told numerous times to stop resisting, the defendant said, “F*ck that, I’m not going anywhere.”

Once handcuffed, the defendant attempted several times to flee the kitchen while screaming profanities at the officers. Officers eventually cuffed his legs so he could no longer fight or flee. Four officers had to safely carry the defendant to the cruiser for transport. During the ride, the defendant repeatedly kicked the door and the window of the cruiser.

Other twists were located in the apartment on a coffee table and in the couch (4.88 grams and 3.48 grams respectively), as well as a sandwich bags, a cutting agent and $732 in cash.

The defendant’s adult criminal history includes a conviction in 2014 out of the Norfolk Superior Court for possession with intent to distribute Class B (cocaine) for which he received a two & one-half year jail sentence. On that same indictment, the defendant received a probation sentence on charges of assault and battery on a police officer and resisting arrest. The defendant violated his probation on both counts and received a one year committed sentence.

In 2009, the defendant was convicted out of the Norfolk Superior Court on two counts of possession with intent to distribute class B and received a sentence of four and a half years to the state prison. On that same indictment, he also received concurrent sentences for convictions of controlled substance violation in a school zone, possession of a firearm, possession of ammunition, improper storage of a firearm, and being an armed career criminal.

The case was prosecuted by Assistant District Attorney Michael Cahillane and the two to three year state prison sentence was imposed by Judge Thomas J. Perrino.

“I am pleased the court convicted the defendant for trafficking in cocaine. He did everything he could to obstruct the police from discovering the cocaine and taking him into custody. ​ The defendant has a prior history and this sentence was warranted to protect the public,” District Attorney Quinn said.