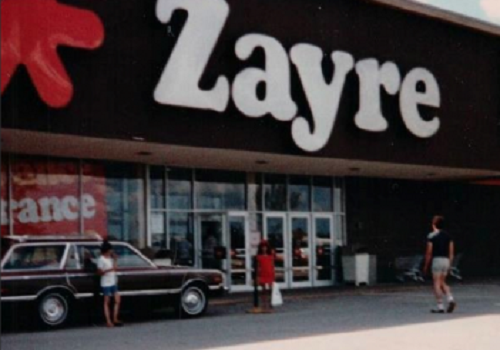 Russian immigrant brothers Max and Morris Feldberg began a hosiery business in 1919 in Chelsea, Massachusetts. When sales began to decline, they ventured out to create a new discount department store.

The department store needed a name however. The brothers agreed on the name Zayre which was a transformation from the Jewish saying “Zehr gut” which means very good.

The first Zayre location opened in Hyannis in 1956. With the help of their children Stanley and Sumner, Zayre grew into one of the largest retail chains in the country with almost 1,200 locations nationwide.

In the mid 1980’s profits began to decline which eventually led to Zayre filing for Chapter 11 bankruptcy in 1988. The department store chain was then sold to Ames and by 1990 the Zayre name was no longer. Ames, however, kept the exterior similar to the style of Zayre at the former Zayre locations.

Ames later filed for bankruptcy protection in 2001 and their remaining stores were closed shortly after.