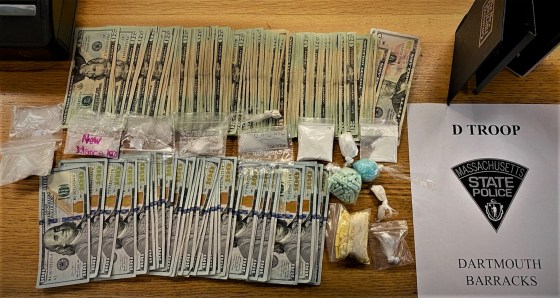 A random inquiry led to the arrest of two people, one from Fall River, by Massachusetts State Police.

According to MSP, at approximately 3:50 a.m. Tuesday, Trooper Ryan Boswell, assigned to State Police-Dartmouth, was on patrol traveling on Sawyer Street in New Bedford. At that time he conducted a random RMV inquiry of the license plate on a gray Range Rover. The results of the inquiry revealed the registration was revoked due to the cancellation of insurance. Trooper Boswell positioned his cruiser behind the SUV and activated his emergency lights signaling the vehicle to pull over.

Upon the Range Rover coming to a full stop Trooper Boswell approached it and identified the operator as Brittany Dias, 33, of South Boston. He also identified the passenger, who was not wearing a seatbelt, as Richard Colon, 41, of Fall River. Both occupants were informed why the vehicle was stopped and that a tow truck was going to be dispatched to remove it from the scene. DIAS and CONLON were removed from the vehicle in order to conduct a tow inventory of the vehicle’s contents.

After questioning and thorough investigation on scene Troopers developed probable cause to search Dias’ person and located approximately $5,000 in cash along with a golf ball sized bag containing a substance suspected to be fentanyl. Additional cruisers then arrived on scene to assist. Both Dias and Conlon were secured in the rear of a cruiser in order for the Troopers to conduct an inventory of the vehicle. They located a partially opened dictionary with a void inside containing a large amount of pills suspected to be Xanax and multiple baggies containing substances suspected to be crystal methamphetamine, crack cocaine, oxycodone, and fentanyl. They also located items consistent with the use and sale of illegal narcotics. In addition to the pills, which were submitted to a lab for official count, the total amount of suspected narcotics seized was approximately 26 grams of fentanyl and approximately 20 grams of crystal methamphetamine.

Dias and Conlon were placed under arrest and transported to the Dartmouth Barracks for booking. They were then transported to an area jail for bail arrangements and were scheduled for arraignment at New Bedford District Court.

Conlon was charged with Trafficking in Fentanyl and Failure to Wear Seat Belt.