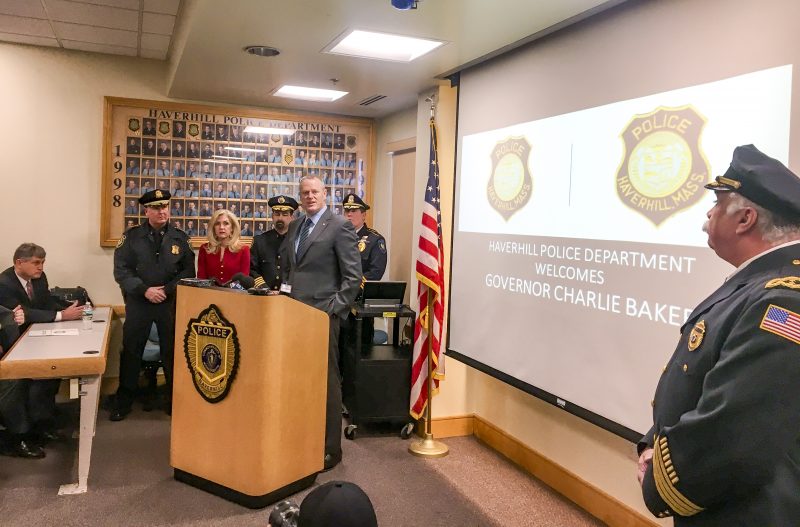 HAVERHILL — Governor Baker joined Essex County law enforcement officials to call on members of the Legislature to pass changes to the state’s Fentanyl trafficking statute to stem the flow of the lethal drug into Massachusetts and give prosecutors the tools to put traffickers behind bars.

“The number of deaths where fentanyl is present continues to rise in the Commonwealth, and our administration is committed to passing more reforms to crack down on the opioid crisis,” said Governor Charlie Baker. “We urge the Legislature pass this fix and to take up our bill filed last summer to update drug scheduling and strengthen penalties for drug traffickers.”

“Fentanyl can be 50 times more powerful than heroin and there is an urgent need to pass this legislation,” said Lt. Governor Polito. “We look forward to working with our colleagues in the legislature to update laws to better stop the flow of lethal fentanyl into Massachusetts and equip prosecutors with the tools to prosecute traffickers.”

Under current law, a heroin dealer who sells 90 grams of 10% heroin is guilty under the heroin trafficking law because he sells a “mixture containing heroin” with a weight of more than 18 grams. But a fentanyl dealer who sells 90 grams of 10% fentanyl sells a mixture “containing” only 9 grams of pure fentanyl – making him ineligible for a trafficking charge – even though what he is selling is a much more concentrated and lethal mixture.

“The law as it currently stands is ineffective,” said Essex District Attorney Jonathan Blodgett. “Without the ability to test the purity of the substance, we simply cannot meet our burden of proof. As a result, we are forced to treat traffickers like low-level dealers, charging them with possession with intent to distribute. This simply makes no sense in the middle of a public health emergency.”

“The enhancements proposed by Governor Baker will provide Massachusetts law enforcement with a valuable tool designed to remove these dangerous drugs and the individuals who sell them from our communities,” said Haverhill Police Chief Alan DeNaro. “Our legislators must always be ready to assess and modify our criminal statutes whenever science or technology impacts our ability to keep the citizens of the commonwealth safe.”

Currently, prosecutors are tasked with enlisting an outside lab to detect not just the presence of fentanyl in seized drugs, but its precise concentration. Most drug dealers who sell controlled substances like heroin, cocaine or fentanyl are selling a controlled substance mixed with other substances, a process often referred to as “cutting” or “stepping on” the drug.

“Since most narcotics that are sold are cut in some way, making this simple change in the language of the statute would eliminate the requirement that the Crime Lab test for the purity of a mixture containing fentanyl in a fentanyl trafficking prosecution,” said Public Safety and Security Secretary Daniel Bennett.

Earlier this legislative session, Governor Baker proposed a package of public safety reforms that would update drug scheduling and strengthen penalties for drug traffickers that distribute drugs, including fentanyl, resulting in death.