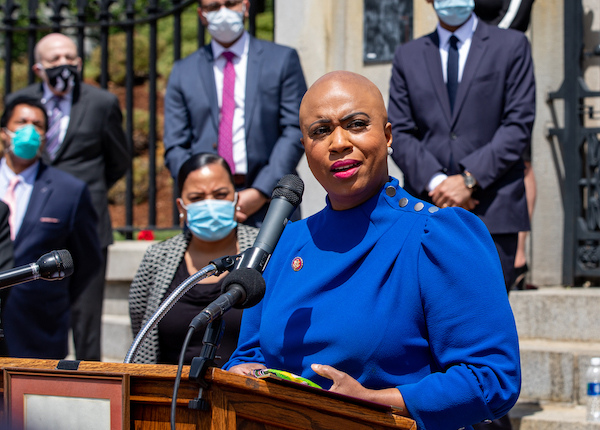 Congresswoman Ayanna Pressley and Suffolk County District Attorney Rachael Rollins joined a chorus of advocates calling for the Baker administration to reduce prison populations amid a surge in COVID-19 cases in the state’s correctional facilities.

Citing media reports and Department of Correction data, Pressley and Rollins said confirmed positive tests at the MCI-Norfolk facility exploded from just two on Oct. 28 to 140 as of Nov. 7. Other parts of the state’s correctional system have also shown upticks, they said, describing October outbreaks in at least two facilities and dozens of positive cases among those involuntarily committed in the Massachusetts Alcohol and Substance Abuse Center.

Pressley and Rollins urged Baker in a letter on Tuesday to use clemency and emergency powers to release those who do not pose threats to the community as a means of lowering the public health risks that inmates as well as staff and visitors who cycle in and out of facilities face.

“Across the Commonwealth, you should direct prisons and jails to reduce the incarcerated population as quickly and as safely as possible,” they wrote. “The lives of Massachusetts residents depend on your compassion and courage, because public health decarceration is literally a matter of life and death.”