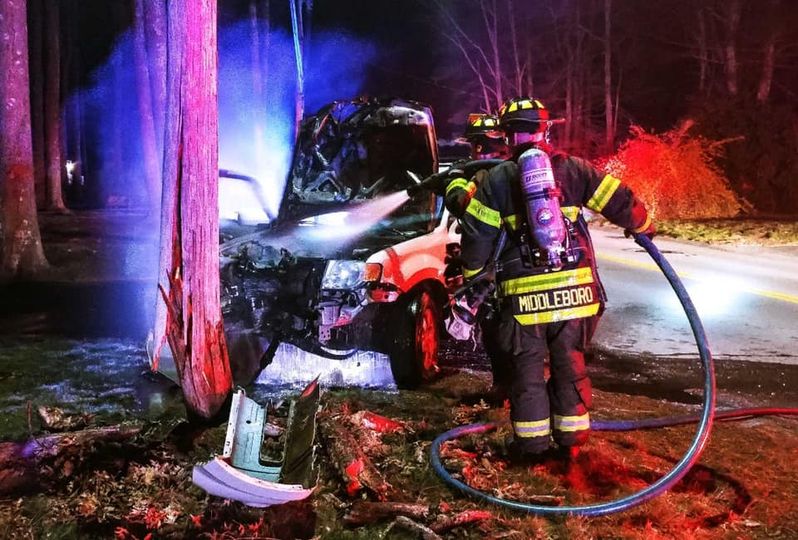 Thanks to the heroic efforts of a local police officer, a driver is still alive this morning after a serious crash.

Chief Joseph Perkins reports that the Middleborough Police and Fire departments responded to a single-vehicle crash on Wood Street last night, during which a MPD officer pulled a driver from the burning vehicle.

At approximately 9:40 p.m. Wednesday, April 14, Middleborough Police responded to a 911 call for a vehicle that had crashed into a telephone pole and was on fire.

Middleborough Police officer Brad Savage responded to 285 Wood Street in approximately one minute and found a 2008 Ford Escape that had collided with a pole and was on fire. The fire was located in the engine compartment of the vehicle and was spreading to the main cabin of the vehicle.

The driver was treated at the scene and transported to Good Samaritan Medical Center in Brockton by Brewster Ambulance with injuries that were serious but not believed to be life threatening.

“Officer Savage’s quick and decisive actions led to saving this driver’s life, and it is an example of how every second counts at the scene of an incident,” Chief Perkins said. “Officer Savage put himself in harm’s way to rescue the driver and I commend him for his heroic response.”

The cause of the crash remains under investigation by the Middleborough Police Department.