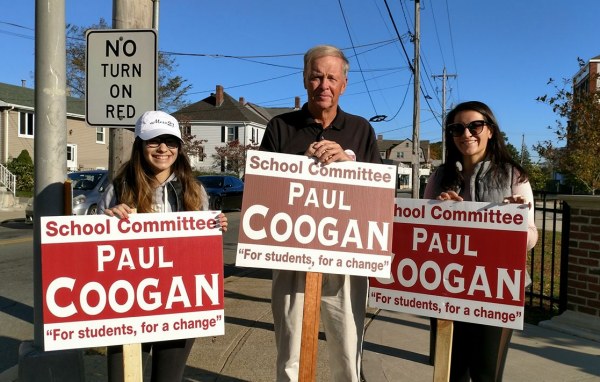 This is an opinion piece I have on Mr. Paul Coogan who is running for Mayor of Fall River. These are personal observations that I have had in the past. I know many rumors have spread throughout Facebook groups that have attacked his character. I stress the importance on why we should not buy into hearsay that damages someone’s character. This is a positive view.

When I was a freshman in high school I could not decide whether I wanted to go to Durfee or Diman. I was signed up to Diman, but I feared that by going there I would hinder my options of going to college. So literally last second, the day that the Durfee freshman semester started, I made up my mind and I showed up to Durfee High School.

The problem was I was not in the system. I had no class schedule. So, they sent me to the office that coordinated to my last name. The white house in which Mr. Coogan was vice-principal.

As soon as I walked in it was packed. Students were constantly in and out. I sat and waited until eventually I was called into the office. There I met Mr Coogan. I was kinda-sorta freaking out because I was basically lost. Right off the bat, I could tell he knew what he was doing. I could tell he had years of experience in his position, his demeanor was confident and knowing. Mr. Coogan had to make a schedule out for me, but this required me to wait because he was booked to the max with other student needs. So, my first week at Durfee was spent in his office.

Naturally, I am a people observer so I got to observe many interactions he had with students coming in.

Many students were in his office for behavioral reasons. I could tell that they were tough cookies to handle in school settings. I believe that is where Mr. Coogan excelled. He had an incredible judge of character. He knew how to be fair, and thorough. The experience reminded me of watching day-time TV judge shows like Judge Judy. Mr. Coogan was constantly giving pep-talks to his students that were heading down the wrong path. He could see the potential in them and worked very hard to guide them in the right direction. This is what inspired me most about Mr. Coogan- he worked to inspire students. He used his experience as wisdom and yielded it to make good judgments.

When it finally got to be my turn to make a schedule, I went into his office. After explaining my situation and my indecisiveness, he shared his wisdom to help me feel confident in my decision. He liked my character so from then on he was always kind to me and had a good sense of humor; cracking jokes in the halls. I came to really like him as a vice principal. He is humble and you can tell he cares about his students. Mr. Coogan has the knack/talent of being a community helper, it is in his nature.

Some years after I graduated, Mr. Coogan reached out to me to see if I could mentor elementary students. Even though I was not able to at the time, the fact he kept me in mind made me feel respected. Also, when it comes to helping the community, children is where my heart is. I love that this is his passion as well. I think he has all of the moral grounds to be a great mayor. We not only need a mayor with a heart, but one with wisdom and experience. I believe Paul Coogan has both.