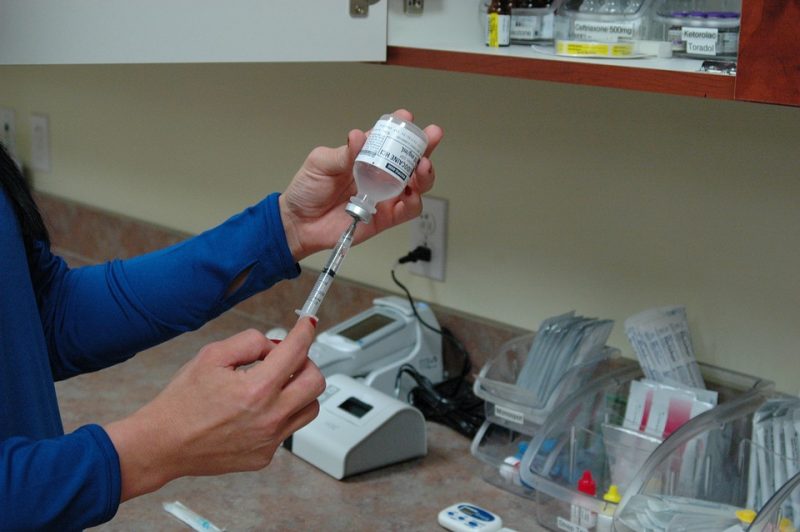 Bars, concert venues and sport arenas won’t fully open to the public in Massachusetts until there is a vaccine, or a treatment, for COVID-19. But if one were to be approved in the fall, or winter, who would be immunized first? And who would administer it?

The fourth and final stage of reopening may seem a long way off given that vaccines are still in various stages of development, but experts agree that planning for the eventuality of a vaccine should begin now.

“It would be a tragedy if a vaccine were produced, available and effective and we couldn’t get it to people fast enough,” said Lauren Stienstra, program director for homeland security and emergency management at the National Governors Association.

The NGA published a policy memo this month suggesting that a “whole of government” response will be needed to successfully distribute a vaccine to the public. Gov. Charlie Baker sits as a member of the NGA’s executive committee.

The nine-page blueprint, which is intended to help states think through the challenges of vaccination, recommended that governors begin convening Cabinets and stakeholders to develop preliminary strategies.

“I think states of course have been planning,” said Claire Hannan, executive director of the Association of Immunization Managers. “They have existing pandemic flu plans that they would have brought off the shelf, dusted off and really started going through.”

But even though states like Massachusetts have existing distribution channels for vaccines, many questions about a COVID-19 vaccine remain unanswered.

Those questions include who will get the vaccine first if there is limited supply, should scope-of-practice laws be amended to increase the supply of medical professionals licensed to administer a vaccine, and will the state employ a “push model” or a “pull model” for distribution.

The latter relies on a strategy of pushing vaccine out to local agencies and private sector partners responsible for delivering vaccine to specific populations. The former involves putting the onus on the public to “retrieve” vaccines from drive-thru clinics, clinics at schools and other distribution sites.

The state could also elect to set up its own vaccination centers, experts said.

“We definitely want to avoid some of the distribution challenges that we saw with testing and Remdesivir,” Stienstra said.

The Baker administration would not say whether it has started planning for the distribution of a vaccine, or if steps had been taken to begin thinking through some of the issues raised by the National Governors Association and other experts.

“The COVID-19 Command Center is in constant communication with the Commonwealth’s nation-leading medical and life sciences organizations, and as a vaccine is developed, will work closely with these groups and federal and state partners on planning for potential distribution,” said Sarah Finlaw, a spokesman for the governor’s COVID-19 response command center.

Hannan said she didn’t know specifically how far along Massachusetts was in its planning, but said generally states were well engaged in the effort. She also said that Massachusetts has a “really good system in place” for disseminating the annual flu vaccine, including experience with getting that vaccine to uninsured adults.

“So I think you’re one step ahead in that respect,” she told the News Service.

There’s also the question of convincing the public that the vaccine is safe. A recent Gallup poll found 35 percent of Americans said they were unlikely to get vaccinated even if the FDA approved a free vaccine today.

In Massachusetts, the task of developing a vaccine is front and center.

Some of the leading candidates to be the first to develop an effective vaccine call Massachusetts home, including Cambridge-based Moderna, which has entered a stage-three efficacy trial to test its vaccine on as many as 30,000 humans, and this week reported some promising early results.

Pfizer, another Bay State pharmaceutical giant racing to develop a vaccine, has also entered third-stage trials, and hopes to be in a position to seek Food and Drug Administration approvals for use by October.

The Trump administration launched “Operation Warp Speed” on May 15 aimed at delivering 300 million doses of a safe, effective vaccine by January 2021.

The NGA said it expects the federal government to purchase and secure all available vaccine once it is developed, and centralize distribution to the states. The Centers for Disease Control held a meeting on July 30 in which one scenario was discussed that would have industry deliver vaccine to a central distributor that would parcel out weekly allotments to states.

“There is a high degree of uncertainty as to the exact processes and procedures that will be used for operations, administration, and logistics,” the NGA memo said.

The policy memo, however, said states should also begin to think about how they will access supply chains for cold chain storage of vaccine, as well as gloves, syringes and wipes. Stienstra said that could mean states like Massachusetts leasing warehouse space to store vaccine before it gets shipped to pharmacies like CVS, or direct to hospitals, clinics and other providers.

The goal, the NGA’s memo said, would be to avoid a repeat of the early days of the pandemic when shortages of personal protective equipment had states competing against one another and the federal government for supplies.

“The military is ready to go,” he said. “They’re ready to deliver a vaccine to Americans as soon as one is fully approved by the FDA and we’re moving very close to that approval.”