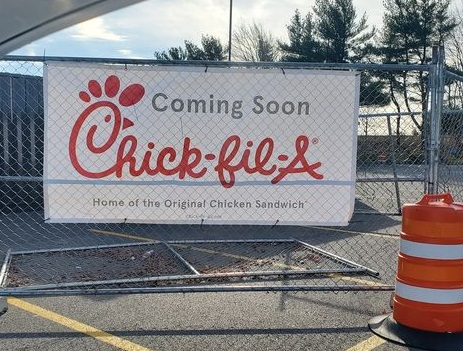 Soon, Chick-fil-A will be adding Fall River to their list of locations.

With current offerings in Seekonk and South Attleboro, the restaurant chain will soon be taking orders from what used to be the empty parcel of land near the back of the lot at SouthCoast Marketplace.

Julie Gallagher is owner/operator of the soon-to-be Fall River location. Jared Stump, the Social Media Director for Chick-fil-A Fall River stated that the team is shooting for an opening at the end of June, but that isn’t 100% nailed down yet.

Special opening day festivities are planned, but have yet to be revealed.

Chick-fil-A is known for, of course, chicken. The franchise states that they focus on in-store food preparation and serving chicken that is whole breast meat raised with no antibiotics, fillers or added hormones. Fresh produce is delivered several times a week. Salads are prepared to order throughout the day and their famous Chick-fil-A Lemonade® is prepared daily with lemon juice, pure cane sugar and water.

Locations are closed on Sundays so that employees can set aside one day to rest and worship if they choose. It is a tradition that they have upheld since founder Truett Cathy opened the first location in 1946.