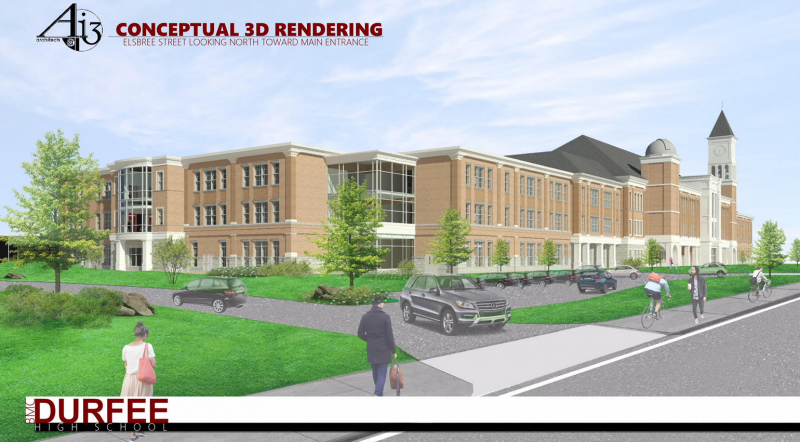 Dwight Silvia, a contractor working at the new Durfee High School, issued a statement in Fall River Reporter’s “Fall River” group on Facebook concerning work going on at the school.

The statement is as follows.

“I am a mechanical contractor here in Fall River. Presently, my company is performing the HVAC work at the new Durfee High School, and in 51 years of construction experience, I have never seen a more poorly constructed building than this structure. When done we the taxpayers and residents of Fall River will have a structure that will be worst than the old school being torn down at a price tag of +/-$263,000,000.00.

“I assure you everything I am telling you can be verified as several city employees as well as those involved in the project are documenting numerous deficiencies that the construction manager has attempted to cover up during construction.

“1) If you drove by this project during late summer/ early fall you may have noticed many windows were missing in the facade of the building, but the sheet rock was installed, walls painted and cabinetry work installed. However, the roof was not fully installed resulting in major water infiltrating the building and soaking the sheetrock as well as the cabinetry. This went on for months. Not until the recent installation of the bell tower, was the building somewhat watertight. Consequently, mold and mildew developed. The construction manager’s solution was to cut the bottom two feet of sheetrock from random rooms and replace only those sections. The CM (construction manager) also supposedly did air testing internally without anyone actually witnessing or overseeing this testing. I am not a mold remediation contractor, but am a mechanical engineer and I am smart enough to know that mold and mildew have no height limits. When one of the persons responsible for the direction of this folly from CM’s management team was questioned, his response was “if I put up 400 sheets/day and have to replace 100 sheets, we are ahead of the game”. This would be great but when will they replace the other 100+ sheets damaged by the rivers of water that ran down the walls? Does the mold an mildew still exist?

“So, in the next couple of years when your kids are continually sick without obvious cause, think of the mold and mildew still present in this $263 million dollar disaster.

“2)For those of you unfamiliar with building standards and fire safety requirements, let me give you a quick tutorial. Fire rated floors and walls are a standard in commercial construction today. We all realize how quickly a fire can spread and the cost of human life that can result from an improperly fire-safe building. Part of this requirement is installing a fire safe compound on all penetrations within the building’s architectural pipe and duct chases that allow these items to pass through the floors and prevent fire and smoke from mitigating from floor to floor or to other areas of the building. This work is the responsibility of the CM. Throughout the project, both the building inspector, Glenn Hathaway and the director of the Fall River’s DCM, Chris Gallagher have been diligent in enforcing the project’s building codes and the project’s design specifications. Thank God!! Numerous times they have uncovered the CM’s failure to provide properly fire stopped or penetrations not fire stopped. The CM has purposely enclosed these chases well knowing the firestopping had not been completed. This is an enormous dereliction of the CM’s obligation to provide a fire safe building, yet they continue to construct what could be a death trap that has the potential of killing the occupants. You may asked how one of the largest contractors in the country can allow this? Just walk through and observe the age and experience of the CM’s management team. Most are fairly fresh out of college with little or no experience and they work cheap! These young people have been employed at a wage rate much less than a person with construction experience. The subcontractors on this project experience this ineptness every day with actions that have no reasonable explanation other than they were directed to perform a function but cannot provide the logic needed to carry out the task to which they were assigned. To add injury to insult, the owner of the construction company asked the mayor to prohibit the City’s watchdogs from access to the building. The mayor wisely refused this ludicrous suggestion.

“3)Maybe you have noticed in last month or so the installation of the asphalt roof shingles on the Elsbree Street front side of the building. Recently, a member of the building committee was driving by, and being a roofing contractor noted the roof shingles being installed were not in compliance to those specified. Consequently, ALL of this roofing material will need to be removed and replaced. This will be done at no cost to the City. But someone should ask where was the CM’s management team through this whole installation. This building is being constructed under the “MGL-149A CM at Risk” laws. This law states the CM is responsible for the supervision and construction of the project. As I noted above, this item, plus many other deficiencies question this CM’s competence and ability to perform to the level the Fall River taxpayer should expect for this quarter billion dollar plus project. Had not this item been detected and reported, do you think that the CM would have corrected this work?

“4)The plumbing on this project was bid in two phases to allow the project to start without a full set of design drawings. The first phase was the underground plumbing and the second phase was the above ground and finish plumbing. This project includes a courtyard surrounded by the building. It was recently discovered that the underground piping for main drainage for this area was plumbed incorrectly and the piping is actually above grade, and thanks to the diligence of the plumbing inspector, discovered. Now, due to the CM’s incompetence, all this plumbing will have to be removed and replaced. Had not the plumbing inspector discovered this problem, this mistake would have cost the City a huge amount of money to correct after the project was completed.

“5)The CM’s owner has been summoned to the site several times to explain why these items, plus a slew of others too numerous to list are occurring on this project. This person arrives to the City in a Bentley, with a chauffeur and a BODY GUARD!! WHY the armed body guard? Does this not remind you of the Buddy Cianci era or something out of a crime novel? He gives the City lip service but his real intent is not to deliver a quality product as he has aptly demonstrated. The scary part of this scenario is we have several building committee members who share a business relationship with this person. Is this not a conflict of interest? What other secrets and deals are not being revealed to the public?

“6)Come late spring the new building will be turned over to the City. Then the demolition of several sections of the old school will begin. Once the weather warms, this construction site will be a dust bowl. What this means is that $10 million dollars worth of new HVAC equipment will be exposed to conditions that will severely impact the mechanical operation of this equipment resulting in a much shorter life span. The CM has no intention of protecting this equipment or exposing our new facility to dirt, dust and possible asbestos residue from the wall panels that were installed on the old school. I have noted this to the powers to be without response.

“I don’t need to remind many of you who experienced the fraud and corruption that existed when back in the ‘70’s when the existing monstrosity of a high school was built but never ceased in costing the taxpayers of Fall River a lot of money every day. We accepted the status quo, poor quality and didn’t hold those responsible for their questionable actions. Are we repeating history?

“Everything I have said has been documented with video, pictures and testimony from those individuals constructing this project and witnessing this travesty every day.

“In the spirit of honesty and transparency I will state my company has had some minor problems but most where those of my subcontractors who perform under our contract. However, this is not an unusual occurrence on construction project. And once we are notified of a problem, we move quickly to resolve the issues. Furthermore, these problems do not effect life safety or have any effect on the integrity of this building.

“Like most of what goes on in Fall River, this disaster will be covered up. The new floors will be waxed and the windows will cleaned until they shine. But the underlying problems caused by poor construction practices will linger and you, the Fall River taxpayer will continue to pay.”

“Issues raised in a social media post regarding the new Durfee High School have been known for some time and have been promptly addressed. Residents should trust that our Building Oversight Committee and the team at the construction site have kept a watchful eye on the project. Taxpayer money is not being wasted. At the end of the year, our students will have a safe, well-constructed school that will last for decades. The author of the post referred to the team from the City of Fall River as being “diligent” and thorough in enforcing building codes needed for a successful project. Please know the City has an excellent working relationship with Suffolk Construction and all of the sub-contractors on the job. We will continue our daily monitoring at the site.”