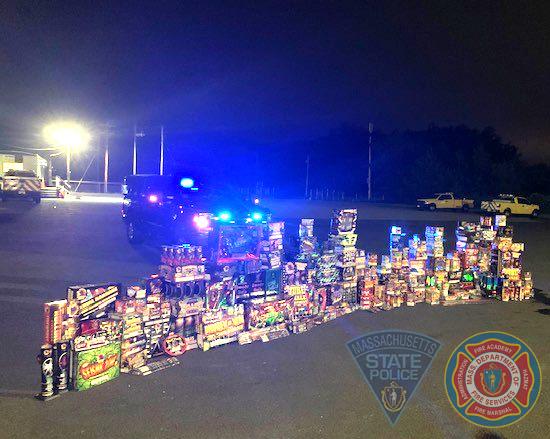 In advance of the Independence Day weekend, State Fire Marshal Peter J. Ostroskey and Massachusetts State Police Colonel Christopher Mason issued a reminder that fireworks are illegal in Massachusetts and should be left to professionals.

For more than a month, the State Police Bomb Squad – part of the Fire and Explosion Investigation Unit (F&EIU) assigned to the Office of the State Fire Marshal has been working with local police and fire departments to enforce the Commonwealth’s fireworks laws and intercept fireworks being brought into the state illegally. To date, troopers have seized more than 11,000 fireworks and issued about 50 summonses for court hearings.

“Fireworks are illegal in Massachusetts because they are dangerous,” said State Fire Marshal Ostroskey. “Permits have been granted for dozens of municipal fireworks displays so far this season, which are carefully planned and orchestrated by licensed professionals, but pyrotechnics in untrained hands pose a hazard to life and property. They are especially dangerous to children, who suffered more than 40% of the fireworks-related burn injuries reported to us in the last ten years.”

“Through targeted enforcement and during routine traffic stops, State Police and our local partners continue to intercept illegal fireworks on Massachusetts roadways,” said Colonel Mason. “State law requires that these fireworks be seized, and those who possess them could end up in court. For the safety of our friends, families, and communities, let’s leave fireworks to the professionals and have a happy, safe Fourth of July.”

Between 2011 and 2020, there were 941 major fire and explosion incidents involving illegal fireworks reported to the Massachusetts Fire Incident Reporting System (MFIRS). These incidents caused 12 civilian injuries, 42 fire service injuries, and an estimated dollar loss of $2.1 million – a high figure given that most fireworks fires are outdoor brush fires.

Last year in particular, communities across Massachusetts saw a huge increase in fireworks complaints over 2019. Complaints increased by 1,518% in Boston; by 611% in Brockton; and by 409% in Lawrence. Statewide, the State Police Bomb Squad had a 63% increase in response to fireworks calls in 2020 over 2019. Eleven people were displaced when illegal fireworks landed on the roof of a Worcester triple-decker, igniting it, and 20 people were displaced in Boston when someone set off fireworks in the rear hallway of a six-unit apartment building.

Additionally, 32 people were treated at Massachusetts emergency rooms last year for severe burn injuries from fireworks (burns covering 5% of more of the body) according to the Massachusetts Burn Injury Reporting System. Other injuries included a 16-year-old boy who suffered first- and second-degree burns to his lower body; a 13-year-old boy who suffered burns to 10% of his body surface area; and a 4-year-old girl who suffered burns to her hand when she grabbed a lit sparkler – which burns at a temperature hot enough to melt glass.