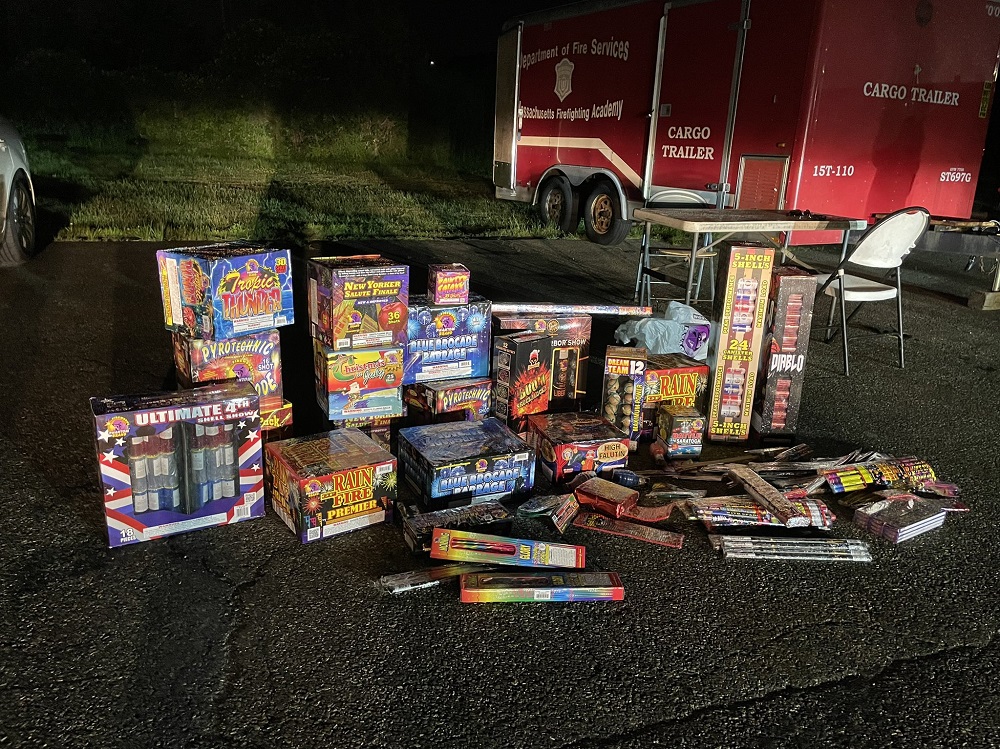 According to Dave Procopio of Massachusetts State Police, on Friday evening, Troopers from the Department’s Division of Investigative Services and Firearms and Explosives Investigation Unit stopped several motor vehicles containing occupants who had purchased fireworks in another state and carried them into Massachusetts. Seven people were issued summons to appear in court to face charges of illegal possession of fireworks (MGL Chapter 148, Section 39). Troopers seized approximately 425 items, many containing large volumes of multiple shots, with a total value of approximately $8,000. Among the items seized were aerial shells, cakes, large rockets, fountains, sparklers, and Roman candles, among other types. 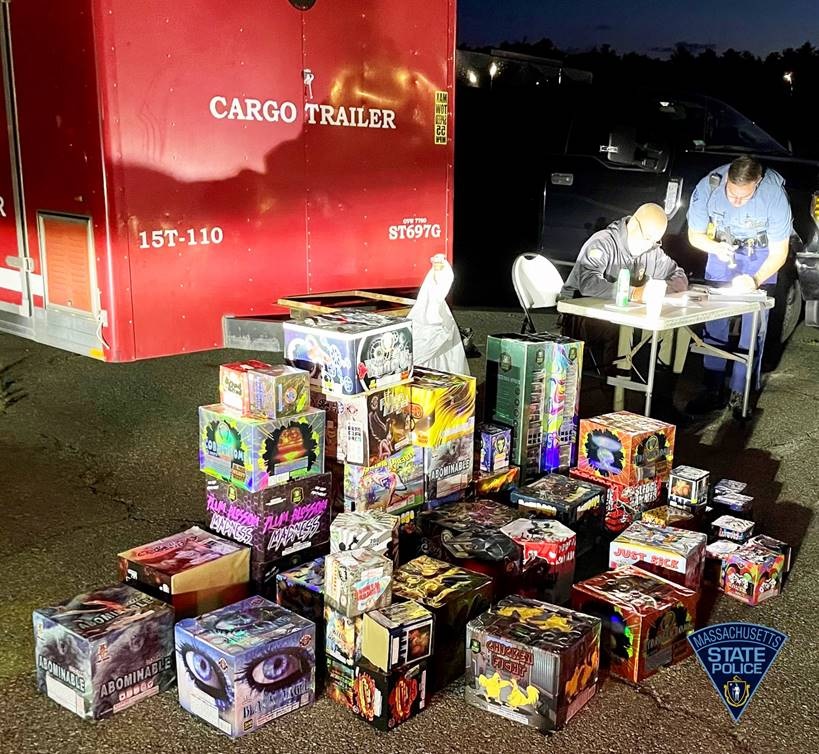 The next day, Troopers again stopped several motor vehicles whose occupants were illegally in possession of fireworks that had been purchased elsewhere. Troopers issued six summonses and seized 654 items, many containing large volumes of individual shots, with a total value of more than $10,000. Among the items seized were aerial shells, cakes, fountains, bottle rockets, large rockets, Roman candles, sparklers, and 34 packs of firecrackers containing a total of 17,337 individual firecrackers.

Team members concluded the weekend’s activity on Sunday with the same investigative and enforcement procedures, leading to the issuance of summonses to five people illegally in possession of fireworks in Massachusetts. On Sunday, Troopers seized 501 items worth more than $10,000 in total. As in the previous two operations, seized items included cakes, fountains aerial shells, bottle rockets, and Roman candles. 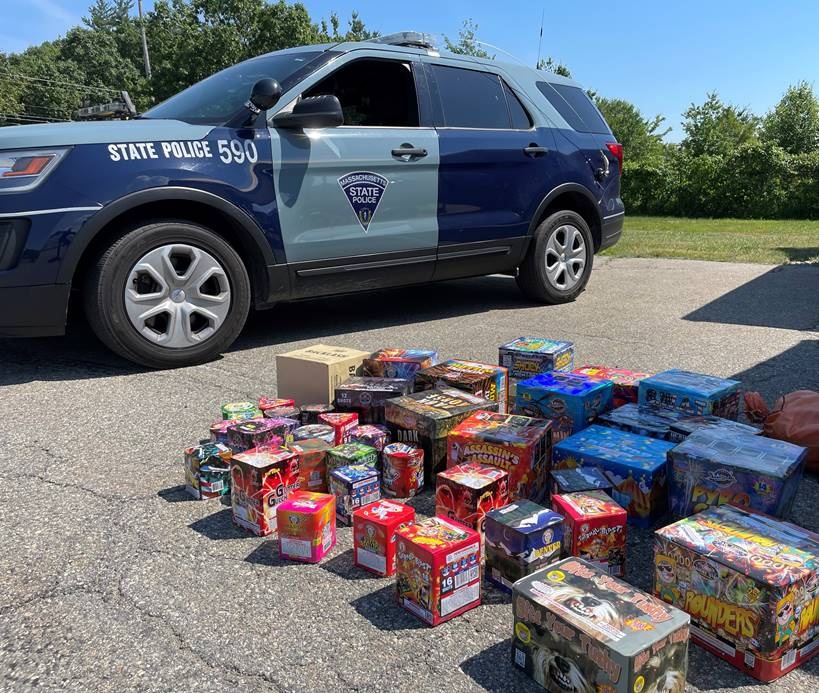 MSP continued fireworks interdiction with seizures of numerous fireworks over the last few days. Troopers have issued summonses to more than 30 people.

All seized fireworks were documented and secured for eventual destruction. The fireworks interdiction efforts are ongoing.

Massachusetts fire departments reported more than 900 fires related to illegal fireworks between 2012 and 2021, officials said. In addition to the 43 fire service injuries and $2.1 million in damages attributed to these fires, Massachusetts medical facilities reported 31 severe burn injuries extending to 5% or more of the victims’ bodies that were caused by illegal fireworks. 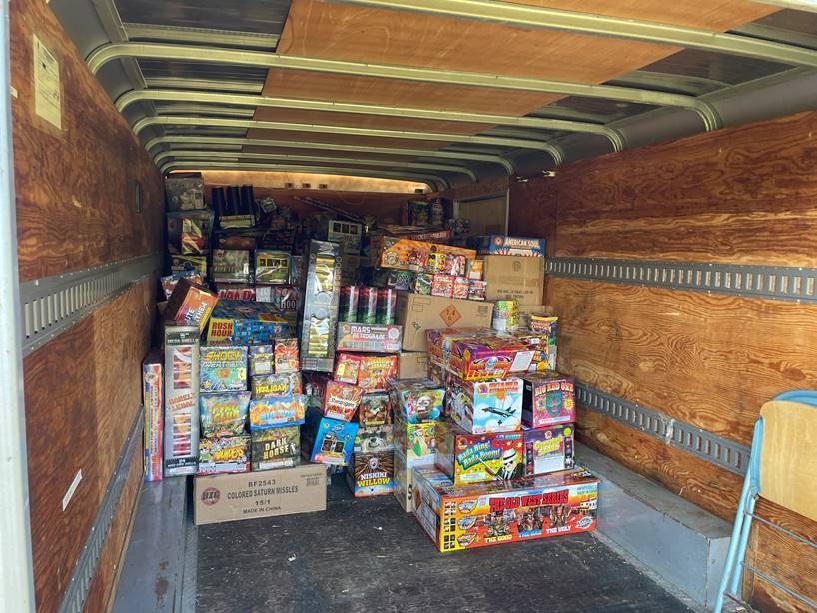 Officials emphasized that fireworks, including sparklers and firecrackers, are especially unsafe around children. Sparklers burn at temperatures of over 1,800° Fahrenheit – hotter than the melting point of glass and aluminum. According to a report from the U.S. Consumer Product Safety Commission, an estimated 1,600 emergency department-treated injuries associated with firecrackers and 900 with sparklers were reported in 2020, accounting for almost 10% of all fireworks-related injuries that year. Of the 900 injuries from sparklers, 44% were to children under the age 5.

The Department of Fire Services and the State Police urge Massachusetts residents to enjoy fireworks at permitted events, such as those held by many cities and towns and the annual Boston fireworks show on the state’s Charles River Esplanade. DFS posts a list of permitted displays and updates it each week through the summer. To view the list – and to learn more about the dangers of illegal fireworks – visit the DFS website.