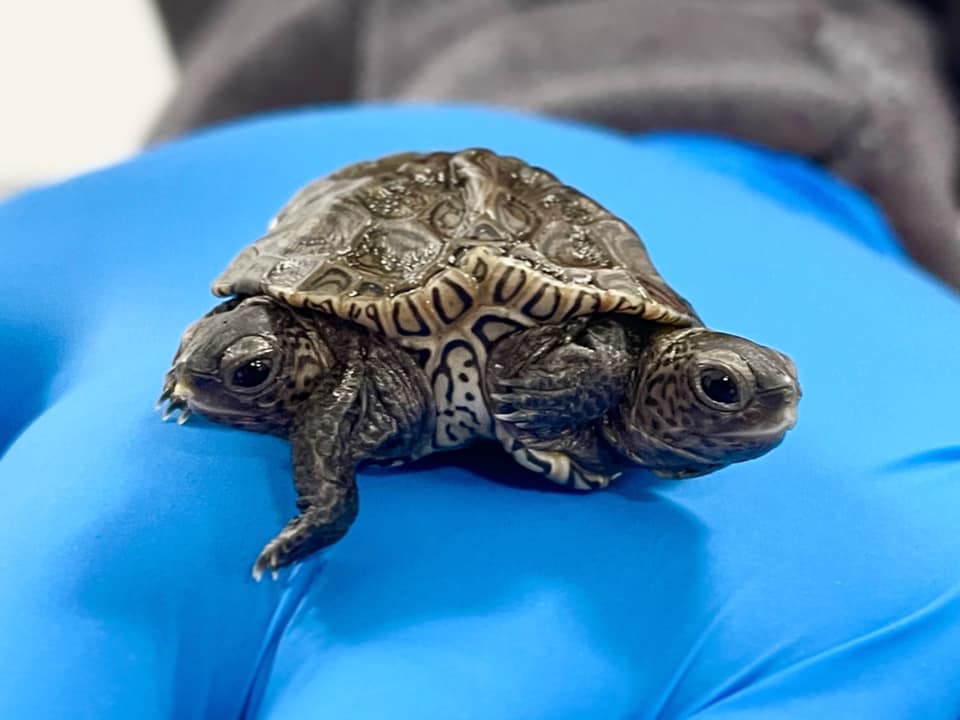 No you are not seeing things. This diamondback terrapin hatchling actually has two heads.

According to the New England Wildlife Center, the two heads is caused by a condition called “bicephaly and is a rare anomaly that can occur from both genetic and environmental factors that influence an embryo during development. They hatched from a protected nesting site in Barnstable and were brought to the hospital by Barnstable department of natural resources for assessment.”

NEWC says that “similar to conjoined twins in humans, they share parts of their body, but also have some parts that are independent. In this case “they” have two heads and six legs. On admission both sides were very alert and active and our veterinary team was eager to learn more about them.”

Animals with this rare condition sometimes don’t survive very long or live a good quality of life, but the NEWC is optimistic.

“They” have been in their care for just over two weeks and continue to be bright and active.

“They are eating, swimming, and gaining weight each day. It is impossible to get inside the heads of these two, but it appears that they work together to navigate their environment.”

So far, X-rays revealed that they have two spines that fuse further down the body, according to NEWC.

“We have been observing them moving and swimming showing they each have control of three legs. After hatching they had one shared yolk sac that provided them nutrition in the first few days after entering the world however with that resource used up our next step was to see what their gastrointestinal (GI) tract looked like and if they would each be able to eat and absorb nutrients to continue to grow. A barium study revealed they each have separate GIs. The right side appears to be slightly more developed but they are eating and digesting food. A supervised deep water swim test showed that they can coordinate swimming so that they can come to the surface to breathe when needed.”

The New England Wildlife Center continues to learn more about the two-headed terrapin.