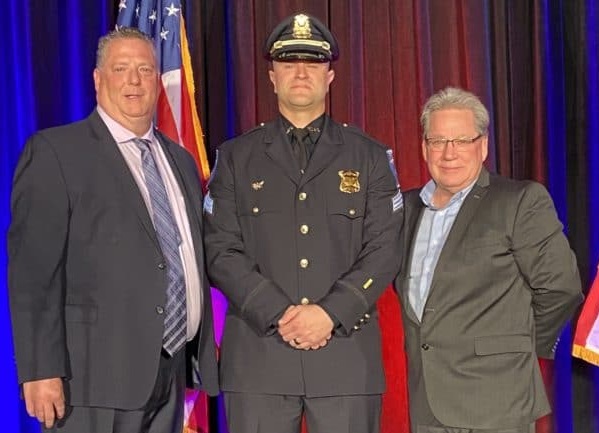 WINTHROP — Chief Terence M. Delehanty has announced that a member of the Winthrop Police Department earned national recognition for his efforts in responding to an incident of hate-motivated violence last summer.

Sgt. Nick Bettano earned the Honorable Mention Award from the National Association of Police Organizations for his response to the incident last June 26 in which a man with South Coast ties crashed a stolen box truck into a vehicle and building before fatally shooting two bystanders. The investigation revealed the suspect may have intended to crash the truck into a synagogue before losing control of the vehicle.

Sgt. Bettano was recognized on Thursday, May 12, at the NAPO’s TOP COPS Awards outside Washington, D.C.

The TOP COPS Awards is an annual event designed to recognize police officers from around the United States for their service on behalf of their communities.

Sgt. Bettano was the first to arrive on scene, after learning en route that the crash he was responding to was in fact an active shooter incident. Upon arrival, a bystander directed Bettano toward the suspect, whom he observed to be in possession of a .45 caliber handgun. Sgt. Bettano assisted multiple bystanders to safety before making several attempts at commanding the suspect to drop his weapon.

Sgt. Bettano was forced to discharge his own weapon, wounding and ultimately killing the suspect, after the suspect aimed his firearm at Sgt. Bettano.

“This event was a significant tragedy, which impacted our entire community, and Sgt. Bettano’s quick thinking and bravery as the first responder on scene undoubtedly prevented it from becoming an even worse tragedy,” Chief Delehanty. “He is incredibly deserving of this recognition.”