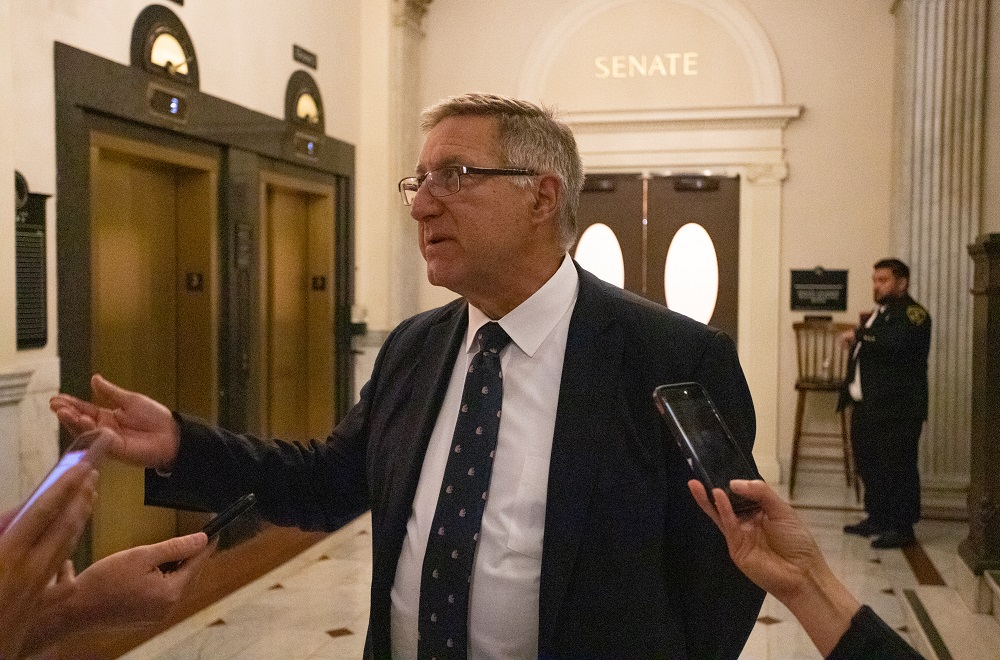 Senate Ways and Means Chairman Michael Rodrigues on the branches' sports betting deal after 5 a.m. Monday: "And that's how you get things done, is reach compromise." [Sam Doran/SHNS]

By Colin A. Young and Michael P. Norton

STATE HOUSE, BOSTON, AUG. 1, 2022…..House and Senate negotiators struck early morning agreements Monday on sports betting and mental health access but will keep a significant economic development bill in conference committee as they continue to wrestle with an existing law that could trigger nearly $3 billion in tax relief this year.

The deals on sports betting and mental health access were announced at about 5:15 a.m., more than five hours after the legislative rules called for the formal sessions to end for the year. The deals represent victories for both House Speaker Ronald Mariano, who has been a strong advocate for sports betting, and Senate President Karen Spilka, who prioritized the mental health bill.

The sports betting bill (H 5164) will legalize wagering on professional and some collegiate contests, though betting on Massachusetts colleges and universities will not be allowed unless they are playing in a tournament like March Madness, lead Senate conferee Sen. Michael Rodrigues said.

“The Senate bill came out with no college at all. The House had full college and we compromised on just no in-state college,” he said. “And that’s how you get things done, is reach compromise.”

Mariano told reporters as the sun was rising Monday that Massachusetts bettors will “still be allowed to bet on just about everything else.”

“The fact that she was concerned about the comments by a few college presidents, we thought that maybe taking that out would speed us along and get us to a deal,” the speaker said, referring to Spilka sharing the concerns of the presidents of every Massachusetts college or university with Division I athletics, who were opposed to allowing betting on their contests.

Jason Robbins, CEO of Boston-based DraftKings, said his company is “thrilled that our home state has acted to protect consumers, create jobs and grow revenue in the Commonwealth.”

Left on the conference committee cutting room floor was the Senate’s whistle-to-whistle ban on sports betting ads during live sporting events. House officials said they were concerned that the provision might be unconstitutional.

The Legislature’s major economic development bill, which included the House and Senate’s preferred tax relief plans, is not emerging from its conference committee purgatory Monday and its borrowing provisions will die on the vine since the branches will not be able to take the required roll call votes.

“I think members are disappointed. You know, we’re all disappointed because we all had projects and investments in that piece of legislation. We had investments that are necessary for our hospitals, for our human service workforce, for early education,” Rodrigues said. “So we’re disappointed, but we want to make sure we get it right.”

The decision means the one-time rebates of $250 to eligible individual taxpayers and $500 to married taxpayers who filed jointly, which lawmakers have promoted in recent weeks, will not be issued, Rodrigues said.

He said the economic development bill is “going to remain in conference until we take a deeper dive and have more time to really analyze the effects of the 62F matter that we just learned about earlier this week.” He was referring to the 1986 law that may trigger $3 billion in tax relief.

He also said that he doesn’t “know what we would have to do to address 62F, that’s why we need more time to really figure if do we need to address 62F.”

But when Mariano spoke about 20 minutes later, he said that taxpayers can count on getting their share of the state’s excess revenue under Chapter 62F.

The speaker said that, had the Legislature proceeded with its $1 billion in tax rebates and cuts in parallel with the 62F relief, “we were going to be spending too much money.” Gov. Charlie Baker disagrees and has said that both relief plans were “eminently affordable” to do in tandem.

Mariano explained why the Legislature saw it differently than the governor: “Because we’re a bit more fiscally prudent and we’re gonna be here at the end of this year when, if the economy makes a downturn, we’re gonna be talking about reductions in line items, potential cuts in budgets, and maybe even if it gets bad eventually tax increases.”

Details on the mental health access compromise bill were scant Monday morning and the bill text was not available from the Senate clerk’s office as of 6:45 a.m. The bill that the Senate passed unanimously in November would mandate insurance coverage for an annual mental health exam, similar to an annual physical. The bill that the House passed unanimously in June, according to Mariano, would “complement” the Senate bill and “focus on a little bit of a different area” with the goal of “creating a complete mental health program for our citizens in the Commonwealth.”

Though agreements were struck and announced just after 5 a.m., both branches still needed to take the votes necessary to pass the compromises and send them to Gov. Charlie Baker. The House and Senate were both active at 7 a.m. Monday.

Sessions that started at or before noon Sunday went deep into Monday morning and were marked by long recesses. There was no shortage of lawmakers who said they were unsure what was happening or just sat around for hours waiting for their colleagues to come to agreements and serve up bills for votes.

Legislators at around midnight moved one bill out of a House-Senate conference committee, agreeing on a slate of cannabis reforms to bring more equity to that sector, regulate host community agreements, and clear a path for cities and towns to authorize cafes where people can use marijuana.

Earlier in the day, the branches returned a climate policy and clean energy bill to Gov. Charlie Baker, adopting some amendments he recommended but leaving others out. Democrats said they hoped the changes would win Baker’s signature on their bill, which a veto would kill since lawmakers waited until formal sessions were ending for the two-year session to settle on a plan and would not have a chance to override the governor.

Other bills sent to Baker’s desk would authorize $11.3 billion in new infrastructure spending, crack down on the taking or transmission of images of crime victims by first responders, and extend the laws enabling wagering on simulcast horse and dog races.

The revelation earlier this week that a 1986 voter law could trigger $3 billion in tax relief caught Beacon Hill off guard and seemed to paralyze Democrats as they struggled to decide whether to pass a $4 billion economic development bill that includes about $1 billion in tax relief or backtrack and chart a new path.

The Legislature last month sent Baker an overdue $52.7 billion annual budget which raises state spending by about 10 percent and Baker signed off on nearly all of it, and said he believes the state can afford both the Chapter 62F tax relief under the 1986 law and the spending and tax relief in the economic development bill.

Also, early Monday, the Senate adopted a proposal to expand the dangerousness law governing which defendants can be detained before their trial. The House on Saturday rejected a dangerousness law amendment recommended by Gov. Baker. The narrower Senate amendment was attached to a state budget initiative designed to make phone calls free between prisoners and their families, a measure that’s now in jeopardy due to the differences between the branches over the pre-trial detention proposal.

Informal sessions are likely to continue in the House and Senate through early January, giving lawmakers the opportunity to keep moving bills as long as there’s unanimous consent among legislators present. Rodrigues said a pared down economic development might move during informal sessions and Mariano said he hoped the Legislature would “pick away” at it throughout informal sessions.