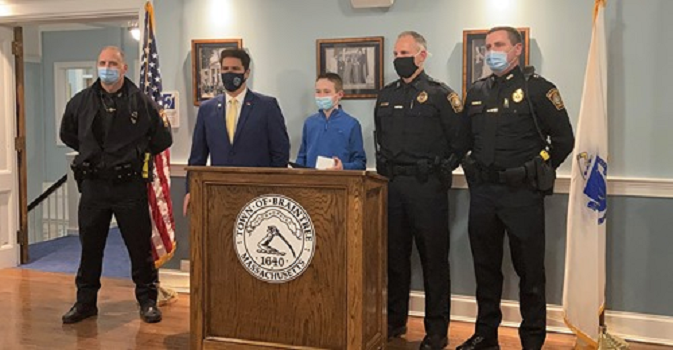 BRAINTREE — Police Chief Mark Dubois and Mayor Charles C. Kokoros are pleased to announce that the Braintree Police Department and Town of Braintree honored a Braintree boy during a ceremony Tuesday for his actions when his sister experienced a medical emergency in December 2020.

On Wednesday, Dec. 16, 2020 at approximately 9:45 a.m., Braintree Emergency Services were called to a medical emergency at a home. A 14-year-old-boy, Jack McDonough, heard his 9-year-old sister fall and went to check on her where he discovered her experiencing a medical episode.

McDonough cared for his sister and calmly called 911. He explained what he was observing and gave medical personnel pertinent information. Braintree Police arrived at the home and located Jack and his sister. The Braintree Fire Department and Brewster Ambulance medics arrived shortly thereafter.

McDonough was able to explain to paramedics what he observed and how long his sister was experiencing the episode. Braintree officers noted that Jack was composed and was able to calmly answer questions and help first responders throughout the situation.

Jack’s sister is receiving the necessary care since the incident and is doing well.

McDonough was recognized for his actions by the Braintree Police Department and Mayor Kokoros on Tuesday, Jan. 26 at Town Hall.

During the ceremony, Chief Dubois noted how well McDonough responded during an emergency that he wasn’t prepared for.

“What’s impressive is that you kept your demeanor, you relayed all of the important facts that were helpful for the people that were responding, you stayed calm and you assisted your sister. When you’re dealing with a family member, it’s that much more stressful which makes how you handled the situation even more impressive from our point of view,” Chief Dubois said.

Mayor Kokoros added, “To have that calmness and to be able to handle the situation shows leadership and says a lot about you as a person. We want to thank you and we’re glad that you were able to help your sister and that everybody was alright.”

McDonough was presented with a Distinguished Service Commendation from the Braintree Police Department which acknowledged that: “Jack McDonough has been recognized for his exceptional courage and performance while assisting in a medical emergency on Dec. 16, 2020.”

McDonough was also presented with a Braintree Police coffee mug and challenge coin, as well as a pin from the Town of Braintree.