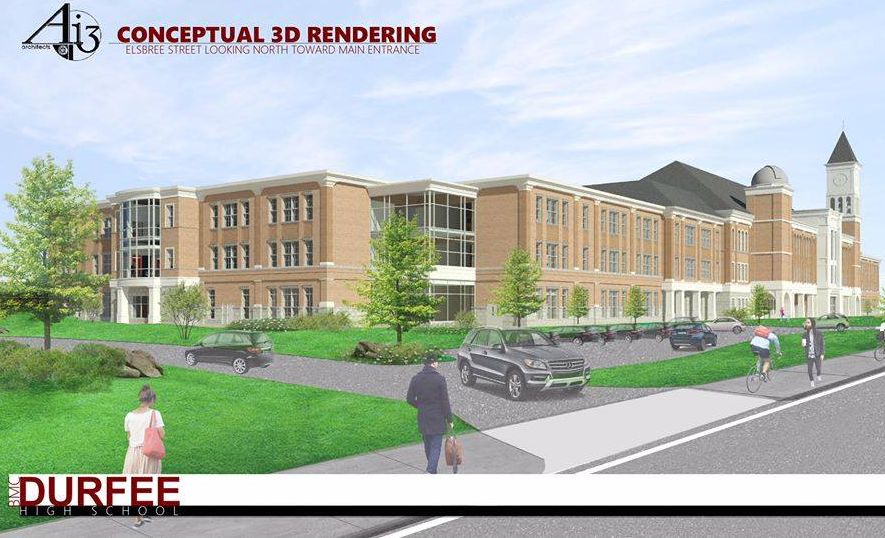 Today, Mayor Paul Coogan released a letter submitted by the company in charge of overseeing the construction of the new Durfee Hugh School.

“While the Project Team has made significant efforts to ensure a quality project, we acknowledge that there have been major issues that have had to be addressed by the Project Team. All these issues have been brought to the attention of the SBC and the City. The entire Project Team has worked in conjunction with representatives of the City to address every issue. However, it should be noted that the majority of these issues are the responsibility of the author of the Facebook post, Dwight Silva, and his company, DDS Mechanical Contractors, Inc. (DDS). We feel that it is important to reiterate the following information because it is crucial in understanding the impetus of what we believe is a very misleading social media post. We believe the author issued this post in a thinly veiled attempt to get ahead of a narrative that is evolving and that will be very damaging to him.

“DDS supplied a Statement of Qualifications in response to a publicly advertised Request for Qualification (RFQ) for Trade Contractors under the requirements of MGL Chapter 149. DDS’ owner, Dwight Silva, was required to confirm that DDS had the experience to complete a project of Durfee’s type, size and complexity. The qualification process highlighted DDS as marginally qualified but DDS was kept on the List of Bidders because they are a Fall River-based company. Ultimately, DDS became the successful low bidder on the Durfee project for the HVAC Trade Contractor work through the MA Filed Sub-Bid process and a sub-contract was subsequently issued to them by Suffolk.

“From the onset, DDS has been significantly behind schedule and has been responsible for most of the quality issues noted on the project. In fact, several of the quality issues that Mr. Silvia describes in the post, are DDS’s issues. To address the significant number of DDS quality and schedule issues impacting the project, the following remedial steps have been undertaken by the team over the past several months:

“Suffolk has placed DDS on contractual notice on 14 occasions (9 formal letters and 5 email notices). DDS is approximately 3 months behind schedule based on their contract’s Construction Schedule with Suffolk. Despite being behind schedule, DDS has refused to work on Saturdays or to stay late during the week to recover schedule and to avoid impacting other Contractors’ work and sequencing. DDS claims that its own people are so inefficient during the week that he cannot pay these same employees to work any overtime. The project has suffered greatly because of this as the critical path of the project schedule is dictated in a significant way by the mechanical scope of work. The project has not been able to install ceiling grids or ceiling tiles because of DDS delays and the project has had to approve change orders to other Contractors for out of sequence work or rework as a result of DDS’ actions. Because of the many quality issues attributable to DDS, including its faulty installation of insulation and firestopping, coupled with its inability to pass air or water tests on the first or even second attempts, LeftField has added 2 MEP Specialist to the Project Team and Suffolk Construction has added another MEP Project Manager to better track DDS’ quality issues. These quality issues have further hampered the schedule by creating rework of not only DDS but to many finish trades that follow DDS’ work.

“Suffolk has had to augment DDS’s staff with staffing from another qualified Trade Contractor in an attempt to recover schedule. Suffolk is planning on back-charging DDS for associated costs for supplementing their work. If not for DDS’s impact on the project, the project would still be ahead of the original Construction Schedule. However, Suffolk has had to modify the Substantial Completion date of the project from 5/31/21 to 7/16/21. While the Substantial Completion date has been pushed out, the Durfee High School remains on target for an August 2021 School Opening as planned.”

Rogers states that although there have been significant quality issues identified on the project, there is a process put in place to monitor, address and correct all deficiencies.

“Below are several of the major issues that have surfaced, and the steps taken by the team to identify and address these issues:

“Asphalt Shingle Roof – As part of the roof inspection and evaluation process, it was decided that the asphalt shingle roof requires replacement. Therefore, the Roofing Trade Contractor was directed to replace the asphalt roof at their expense. In early March weather-permitting, the Roofing Trade Contractor plans to erect scaffolding around the asphalt roof elevations and commence replacement. This work is planned to continue through May and will be conducted carefully in small sections to minimize impacts to other construction activities and will not impact the turnover of the school.

“Firestopping – The majority of deficiencies in firestopping on this project were caused by work performed by DDS. All issues were identified and have been corrected and the building is safe. There is a third-party inspector reviewing firestopping and they sign off on every penetration before walls or ceilings are closed. Wet Drywall – While the building was not fully enclosed and protected by temporary measures, heavy rain events caused some interior drywall to get wet. The drywall was identified, removed and discarded. There was a hygienist that observed and signed off on each condition prior to the reinstallation of new drywall. Part of their evaluation included ensuring that moisture was not present in any remaining drywall and determination of no mold growth in cavities not opened completely. Additionally, mold and moisture resistant and paperless drywall was used in most locations throughout the building in areas of moisture risk as a matter of good practice.”

According to Rogers, the issues that have occurred on the Durfee project have all been documented and are at various stages of being addressed.

“The BMC Durfee High School project is a large, high profile, and complicated project. It is our position that the Project Team has immediately addressed the issues as they were identified and will continue to do so in the proactive approach highlighted in my letter.”

In response to the letter, Silvia stated that Rogers’ assessment isn’t accurate.

“This letter is completely false. Mr. Rogers is not on this project and relying on second hand opinions of others. People in glass houses shouldn’t throw stones.”