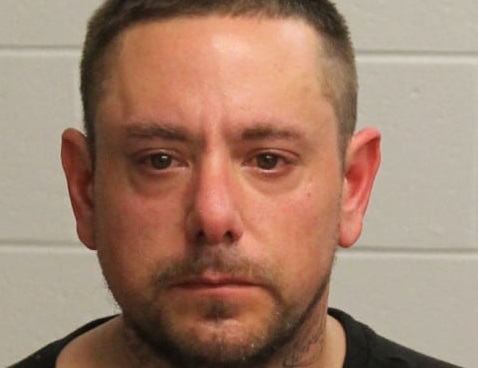 Police arrested a man on firearm, drug and indecent exposure charges after he was located sleeping in a vehicle in an elementary school parking lot on Wednesday.

On Wednesday, June 29, at approximately 9 a.m., Police were dispatched to the Lillie B. Merrill Elementary School, located at 687 Pleasant Street, for a report of a male party sleeping in a vehicle. Upon arrival officers located a male in a blue Chevrolet.

According to Raynham Police, when officers approached the vehicle, they determined that the suspect — later identified as 40-year-old Jeremy Davis of Taunton — was asleep and allegedly had his genitals exposed. Officers woke Davis up and allegedly observed in plain view a glass pipe and glass vial containing what appeared to be — and was later identified as — methamphetamine.

Davis was instructed to exit the vehicle and consented to a vehicle search. During the search officers located an additional container with methamphetamine inside, and a loaded .40 caliber handgun under the front passenger seat.

Davis was taken to the Raynham Police Department for booking and later transported to Taunton District Court, where he was arraigned.

Davis was arrested and charged with Possession of Class B Drug (methamphetamine), Drug Violation Near a School, Indecent Exposure, Possession of a loaded Firearm without a License, Carrying a Firearm on School Grounds, and Improper Storage of a Firearm.

According to police, while school is not currently in session, there were children nearby participating in a camp program. The suspect did not make any contact with the people at the school.

“I would like to acknowledge the members of the Parks and Recreation department for doing the right thing and calling us when they noticed something out of the ordinary,” said Chief Donovan. “We always encourage community members to say something whenever they see something strange, and that’s exactly what they did in this instance”