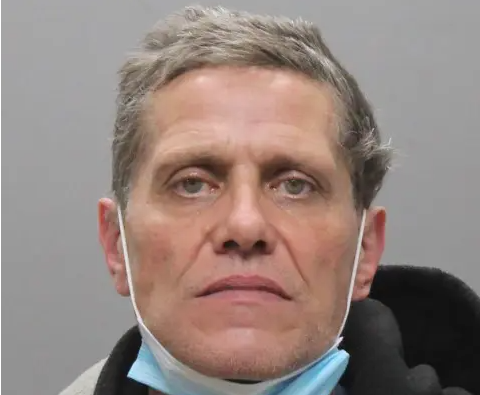 TAUNTON — Taunton Police Chief Edward J. Walsh and Raynham Police Chief James Donovan report that each department has charged a Taunton man with robbing banks in both communities and attempting to rob a Taunton bank a second time this weekend.

At approximately 10 a.m., Saturday, Dec. 19, Taunton Police received a call from a resident who stated that he recognized the vehicle that had just parked outside of his house as the same vehicle used in the robbery of the nearby Santander Bank, located at 188 Broadway, last month. The resident recognized the blue 2003 Toyota Camry and driver, because his video doorbell footage was obtained by police in their investigation into the robbery on Nov. 27.

The resident told officers that the man was wearing the same clothing as the November robbery and was last seen walking toward the bank.

Officers quickly responded to the scene and located the man, later identified as Roger Viveiros, 55, of Taunton, in the parking lot of the bank. Officers stopped Viveiros before he could enter the bank and spoke with him.

Through the subsequent investigation and in searching Viveiros’ belongings, officers found a hand-written note demanding cash in one of his pockets and he was placed under arrest.

Viveiros was charged with the attempting to rob the bank on Dec. 19 and with allegedly robbing the same Santander Bank on Nov. 27 with a note.

Investigators from Raynham Police also responded to the scene in Taunton after learning that Viveiros’ clothing and vehicle matched the same description of a bank robbery in their community on Dec. 4 at the Citizens Bank inside of the Stop & Shop at 36 New State Highway.

“We are very thankful to the resident that noticed that the suspect’s vehicle had once again parked outside of his home and immediately called police to notify us,” Chief Walsh said. “We rely our residents and community members to be our eyes and ears when they witness a crime unfolding and I commend this resident for his diligence and helping to keep his community safe.”

Viveiros is expected to be arraigned today in Taunton District Court.

Chief Donovan praised the officers of both communities for working closely together to charge VIVEIROS in the robberies of both banks. He also would like to thank the FBI for their assistance in the investigations.

“This was great work by officers from both departments to quickly respond to the scene and connecting the dots to tie the suspect to the prior robberies,” Chief Donovan said. “We value our close partnership with the Taunton PD and this arrest was a great example of the excellent police work that can get done when we work together.”