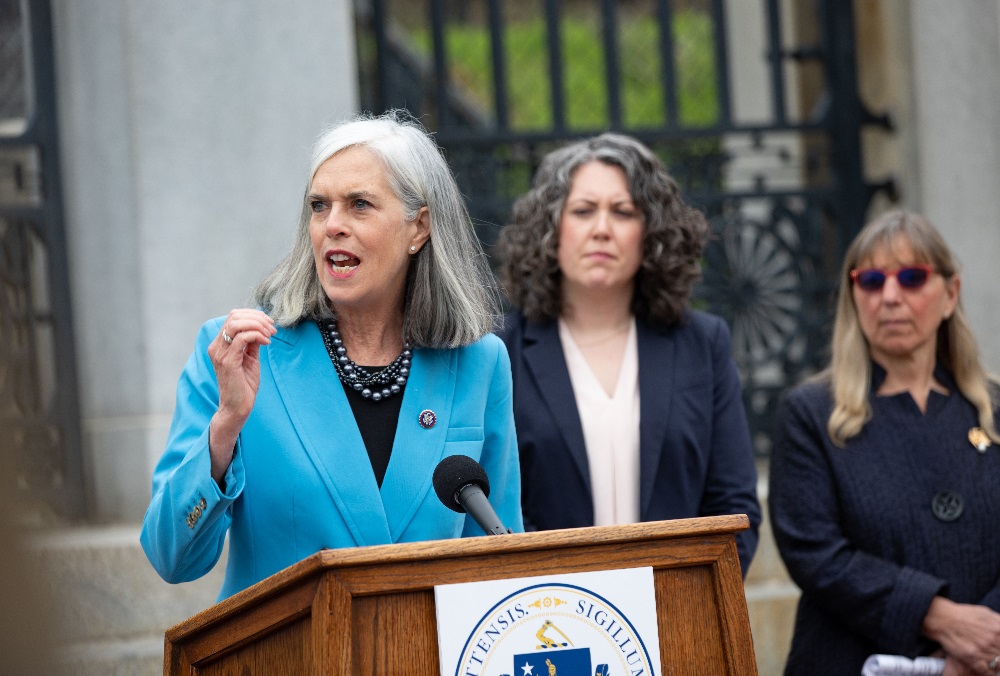 MAY 3, 2022…..Abortion will remain legal in Massachusetts if the U.S. Supreme Court does ultimately overturn Roe v. Wade, elected officials and advocates said Tuesday as they urged Bay Staters to organize against efforts to restrict access to abortion in other states and nationally.

At a press conference outside the State House reacting to a leaked draft opinion suggesting the landmark decision will be overturned, Congresswoman Katherine Clark, the assistant U.S. House speaker, said people should use their votes “to make sure that equality and justice for all is not just a saying, it is actuality and reality.”

“But today we are faced with the reality that women are going to be forced into pregnancy, that women who have been victims of rape, incest, whose pregnancy may determine whether they live or die will not have that right to make a decision,” Clark said. “And that ripple effect is going to affect all of our civil rights and the gains that we have made. So this November, in these races, everything is on the line.”

Clark joined other top Democrats — U.S. Attorney Rachael Rollins, Boston Mayor Michelle Wu, Senate President Karen Spilka and House Speaker Ronald Mariano — and representatives from the American Civil Liberties Union of Massachusetts, Reproductive Equity Now and the Planned Parenthood League of Massachusetts. Speakers warned of potential far-reaching ramifications from the ruling and called for people to get involved this year in races up and down the ballot.

The Supreme Court has not yet issued its ruling in the case challenging the 1973 decision that legalized abortion nationally, but the draft opinion obtained by Politico shows a majority vote to strike it down.

“Roe was egregiously wrong from the start. Its reasoning was exceptionally weak, and the decision has had damaging consequences,” Justice Samuel Alito wrote in the draft opinion in Dobbs v. Jackson Women’s Health Organization, which Politico posted online Monday night. “And far from bringing about a national settlement of the abortion issue, Roe and Casey have enflamed debate and deepened division.”

The Supreme Court confirmed Tuesday that the document was authentic but said it “does not represent a decision by the Court or the final position of any member on the issues in the case.” Chief Justice John Roberts said he had directed the marshal of the court to investigate the source of the leak.

While the draft does not necessarily reflect where the high court will land — and it does not change the current legality of abortion care — an ultimate decision to overturn Roe v. Wade would end access to legal abortion in several states, including ones that have so-called “trigger” bans that will take place if Roe is no longer in place.

Dr. Jennifer Childs-Roshak of the Planned Parenthood League of Massachusetts said her organization’s offices in Springfield and Boston have already been seeing patients from Texas, where a law severely restricting abortions took effect last year.

“Restricting abortion access does not change people’s decision about seeking abortion care,” she said. “It just makes it unsafe, or they force people to continue pregnancies that they do not want and are not ready for and maybe are even harmful.”

The group Massachusetts Citizens for Life stressed that the ruling would not outlaw abortion but move the issue to state Legislatures, saying that if the draft opinion does hold its members “will be very pleased that justices recognized that our Constitution does not imply or permit abortion on demand.”

“We must all wait for the official ruling,” MCFL President Myrna Maloney Flynn said in a statement. “Today, we remain focused on our efforts to protect the dignity of the human person and extend human rights to all, born and preborn. However, we acknowledge that such a ruling would be a historic win for the pro-life movement, and a moment pro-life advocates have worked toward for 49 years — a half century that saw the tragic loss of 65 million lives as a result of Roe v. Wade.”

A decision like the one contemplated in the draft could have implications for other legal protections that rely on similar reasoning used in Roe. Speakers at Tuesday’s event pointed to cases involving marriage, contraception, and LGBTQ rights.

“They’re coming after gay marriage. They’re coming after all the rights that we fought so hard to install in our laws,” Mariano said, knocking policies pursued by some Republican governors and calling for Democrats to strengthen their majorities in the U.S. House and Senate. “Pretty soon, the only laws that will matter will be for white old guys like me. Everything else will be gone. If you don’t believe that that is the goal, I think you better start paying attention.”

A 2020 Massachusetts law codifies the right to abortion care in the state. Proponents pitched the policy, which was tucked into the fiscal year 2021 state budget, as a critical safeguard in the face of potential Supreme Court action and as other states sought to restrict abortion.

“We were worried something like this would happen, and I want to also say that I woke up this morning very dejected, outraged, angry. I believe this is one of the saddest days in the United States’ history,” said Spilka, who also released a statement declaring that “in Massachusetts, abortion is, and will remain, safe and legal.”

The Legislature passed the 2020 measure, dubbed the Roe Act, into law over objections from Gov. Charlie Baker. The Republican governor vetoed the abortion language after lawmakers rejected amendments he proposed.

Baker said at the time that he “strongly” supports a woman’s right to access reproductive health care, but could not support sections “that expand the availability of later term abortions and permit minors age 16 and 17 to get an abortion without the consent of a parent or guardian.”

Baker said over Twitter Tuesday, when he was in Washington, D.C. for meetings with Biden administration officials, that he was “proud that MA has and will always protect every woman’s right to choose what is best for them.”

“If SCOTUS overturns Roe, it would be a massive setback for women in states without responsible laws protecting abortion access and reproductive health services,” he wrote.

Geoff Diehl and Leah Allen, Republicans running for governor and lieutenant governor, said in a joint statement that they “reaffirm our concurrence with Governor Baker’s veto of the so-called ‘Roe Act’ last year (a state law which expands access to late-term abortions), recognizing that extreme bill as a radical move too far by state legislators here in our state.”

The duo said they “join together as we have throughout our campaigns in our respect for the dignity of human life and our belief that decisions on non-federal issues are best left to the states.”

The news out of the Supreme Court arrives as Massachusetts lawmakers are building next year’s state budget — the $49.7 billion spending bill the House passed in late April contained half a million dollars for “improving reproductive health care access, infrastructure and security,” including grants to three abortion funds. Senate lawmakers, when they take up their budget bill later this month, could mirror or build on that.

Advocates cheered at the press conference when Mariano mentioned the funding.

Spilka said lawmakers will look to see “what else we can do to support women and families in Massachusetts and possibly other states” who might need assistance.

Calling for action on Capitol Hill, U.S. Sen. Markey and U.S. Rep. Ayanna Pressley both said the Senate should to abolish the filibuster and pass the Women’s Health Protection Act, House-backed legislation that would prohibit government restrictions on abortion services.

Attorney General Maura Healey, one of two Democrats running for governor, also called for the federal bill to become law.

“If SCOTUS does overturn Roe, it would upend families and rob patients of their bodily autonomy. Massachusetts will be a leader across this country and stand for compassion, care, and respect when others won’t,” Healey wrote on Twitter.

The other Democrat in the race, Sen. Sonia Chang-Diaz, said the suggestion the court will overturn Roe “is horrifying, but unsurprising to anyone who’s been paying attention.”

“We must do everything we can to expand access to abortion and ensure Massachusetts shines bright as a sanctuary for those seeking care both in and out of state,” Chang-Diaz said in a statement.