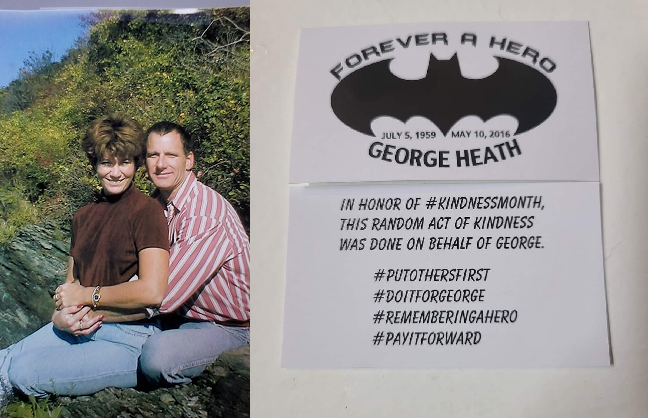 The widow of a local hero is looking to keep his memory alive in a simple way with the help of the community.

0n May 10, 2016, Rosemary Heath’s husband George was murdered while saving the life of a waitress who was being attacked by a knife welding man at the Taunton Galleria. Rosemary grabbed the waitress and pulled her to safety while George went after the attacker and was tragically killed.

Rosemary has continued to give and help others through various events since George’s passing while rightfully reminding the public about her courageous husband.

This year, on the five year anniversary of his death, she wants to send people free kindness cards. Rosemary hopes that the cards will cause people to do random acts of kindness in George’s name.

Rosemary is familiar with accomplishing random acts of kindness herself. In honor of George, she took it upon herself to donate a kidney to someone she didn’t know.

If anyone is interested in the cards, simple email Rosemary your address at rosemarykheath@comcast.net.