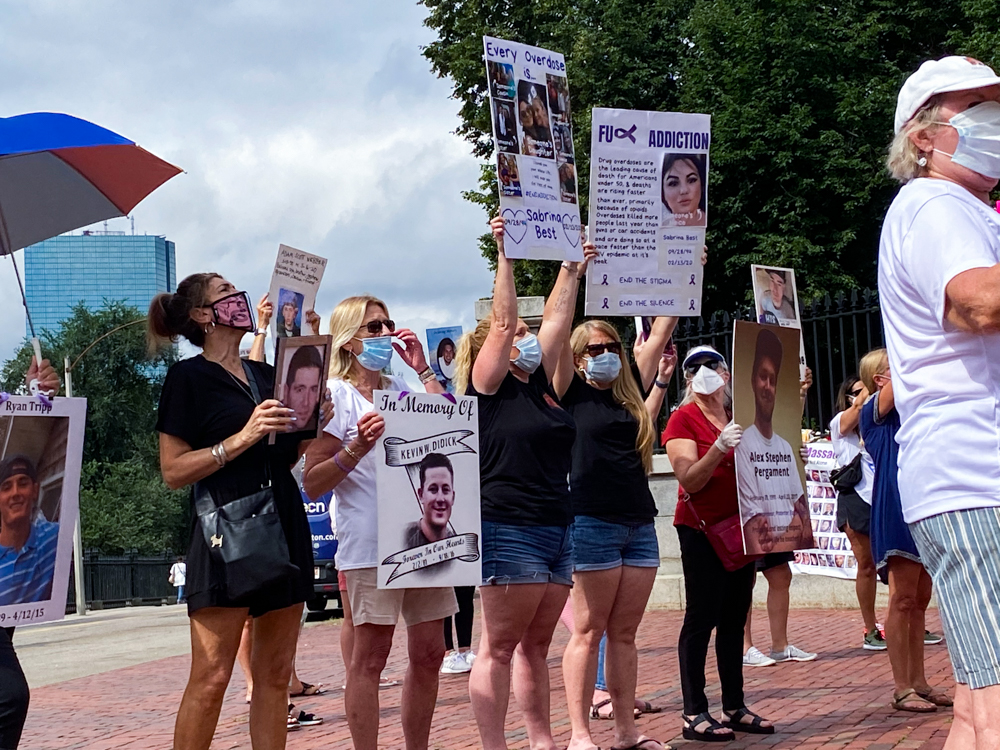 Parents who have lost children to opioid overdoses gathered outside the State House Friday to urge the governor to lower flags to half-mast in honor of International Overdose Awareness Day, part of a national push to get all 50 states to bring flags down halfway on the day.

The Massachusetts-based nonprofit Team Sharing organized the event and works with parents who have lost a child to substance use disorder by providing social networking, grief services, and advocacy. “If you ever have gone to a funeral and and watched a mom put her child in the ground, oh, my gosh, you’d do anything for them,” Cheryl Juaire, whose son Corey Merrill died in 2011 from an overdose, said. “He’s sending a clear message that he doesn’t care, and that’s what we’re really upset about. There was not a good enough reason why he couldn’t do it.”

Baker has focused on reducing opioid overdoses during his time in office and the governor’s office plans to issue a proclamation on Aug. 31 declaring the day as International Overdose Awareness Day but said in a July 9 letter that U.S. Flag Code authorizes only certain, specific reasons for the lowering of the U.S. Flag to half-mast. But the group says Connecticut Gov. Ned Lamont lowered flags in his state to half-mast last Aug. 31 and urged more governors to do the same to bring more awareness to opioid overdose deaths. “We are asking that on this day, for all states to lower their flags to half-staff in remembrance of those lives lost from the disease of addiction,” the groups wrote in a post shared on social media. “And we know that it can be done because it was done for [COVID-19] when 100,000 lives were lost from it.”

Preliminary Department of Public Health numbers show 2,015 people in Massachusetts alone died of opioid overdoses in 2019, a 4 percent drop from a 2016 peak of 2,102 deaths. Almost all of the 2019 deaths where a toxicology screen occurred — 94 percent– involved the presence of fentanyl, while 24 percent of the screens indicated heroin was present, the DPH said. The DPH’s latest report tallied 467 confirmed or estimated opioid overdose deaths in the first quarter of 2020, down 5.7 percent from the previous year.

“The least you can do is lower the flag in recognition of the problem this state continues to face and all the states across the country, step up governor, step up,” Juaire said, looking up from the State House steps towards Baker’s office.