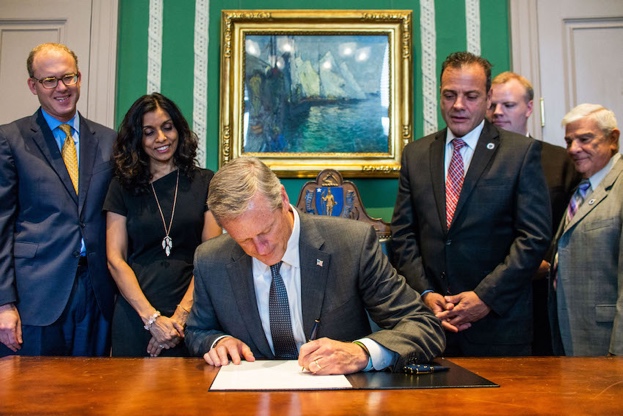 BOSTON – Tuesday, Governor Charlie Baker signed a supplemental budget for Fiscal Year 2018 (FY18) that includes new investments in education and communities, while making a significant deposit into the state’s Stabilization Fund, bringing the balance to more than $2 billion for the first time since 2008.

“This bill will invest additional resources to address the mental health needs of students and make important upgrades to school infrastructure,” said Governor Charlie Baker. “Since taking office, we have worked with the Legislature to protect and rebuild the state’s reserves, and I am pleased that this supplemental budget will also result in us nearly doubling the Rainy Day Fund over the past four years.”

“This bill will provide additional support to our partners in the Commonwealth’s cities and towns to address their security, education and infrastructure needs,” said Lt. Governor Karyn Polito. “We are thankful to the Legislature for passing a supplemental budget that invests the surplus funds from Fiscal Year 2018 in a responsible and meaningful way.”

The bill dedicates $20.7 million in new education support, including funding for two programs to enhance school safety first proposed by Governor Baker in July. Under the supplemental budget, K-12 public schools will receive $7.5 million in grants to invest in security-related infrastructure upgrades and $7.5 million for grants to public schools to hire additional mental health and behavioral health specialists. The budget also includes $5 million for targeted intervention and turnaround efforts aimed at closing achievement gaps in districts with high concentrations of low-income students.

The budget provides $70 million in overall infrastructure spending, including $40 million in grants to cities and towns for local road and bridge improvements and $10 million for clean drinking water projects. The budget also funds a new State Police class and a new class of Department of Correction officers, as well as a $10 million gun violence prevention initiative.

The bill authorizes $541 million in supplemental appropriations overall. It results in a deposit of approximately $220 million into the Stabilization Fund, bringing the fund balance at the close of FY18 to just over $2 billion, or nearly double the balance when the Baker-Polito Administration took office.

The Fiscal Year 2019 budget anticipates an additional $368 million deposit into reserves which, along with interest and other expected transfers, would bring the projected balance at the end of the current fiscal year to approximately $2.4 billion.

“The Baker-Polito Administration has worked in a disciplined way with our partners in the Legislature to put the state on solid fiscal footing, while funding targeted new initiatives that improve services for the people of Massachusetts,” said Administration and Finance Secretary Michael J. Heffernan. “This supplemental budget marks an important achievement, restoring the balance of the Stabilization Fund to more than $2 billion for the first time since 2008.”

A $10 million appropriation included in the budget will fund a reserve to be used to advance costs incurred by the Commonwealth as it responds to the recent natural gas explosions in the Merrimack Valley.

• $101 million to fund collective bargaining agreements
• $33 million for snow and ice removal costs in FY18
• $20 million for underground storage tank removal
• $10 million transfer to the Life Sciences Investment Fund
• $10 million transfer to the Community Preservation Act Trust Fund
• $5 million in transitional housing assistance for hurricane evacuees from Puerto Rico
• $700,000 for tuition and fee waivers for children who turned 18 while in the care of the Department of Children and Families (DCF) and enroll in college, and to children who have been adopted from DCF

The bill also includes changes necessary for the successful implementation of the new paid family and medical leave law and the law establishing an annual sales tax holiday, as well as state tax law changes necessitated by the enactment of the federal Tax Cuts and Jobs Act.