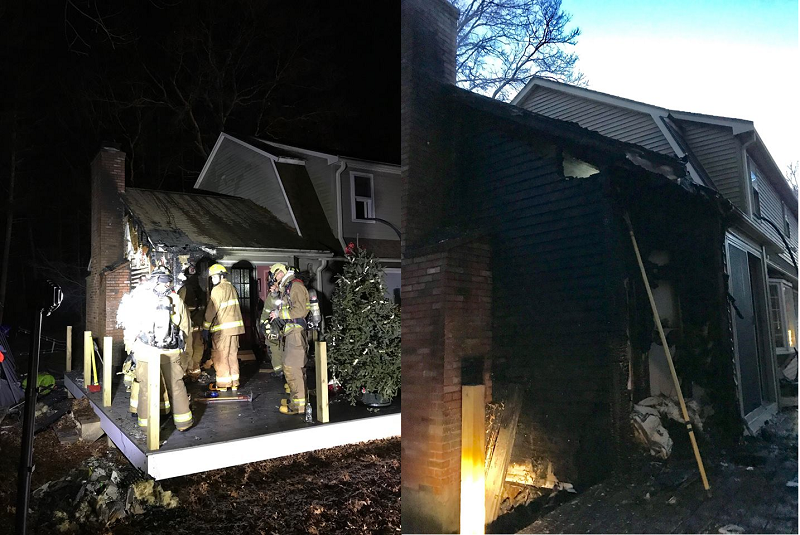 According to LFD, at 3:53 p.m. Sunday, the Lakeville Fire Department was notified by Lakeville PD of a house fire at 5 Alden Road.

The first calls for help came from a neighbor who discovered the fire. The family was not home at the time of the fire. The neighbor was able to coax the family dog outside of the house to safety. A lizard also survived the blaze.

Lakeville PD dispatch provided updates to responding firefighters on the severity of the fire. With that information, Lt. Greg Bradstreet ordered a working fire mutual aid assignment. The Lieutenant also requested 3 mutual aid tankers, as this area of Lakeville lacked any hydrant coverage.

Firefighters arrived to find a fire on the rear corner of the house. A gas grill was involved in the fire, including the propane cylinder. The propane-fed fire spread into the home.

According to LFD, crews quickly doused the exterior fire and then entered the house to battle the structure fire. Fire was found in the walls and attic space. Crews opened up the structure with tools and extinguished visible fire.

The attic space contained blown-in insulation which makes detecting all hidden fires very difficult. After a few flare-ups of fire, crews were forced to remove all of the insulation from the house. The labor-intensive operation took more than 2 ½ hours to complete, with the last crew clearing the scene just after 6:30 p.m.

The house suffered burn damage to the exterior of the house and interior walls in that area of the home. An attic space in the area suffered damage as well. Smoke damage was found throughout the house.

The family, who granted permission to use their name, will be staying with relatives tonight.

The home is owned by Sarah Wass-Cruz and Ryan Cruz. They have two children, 9 and 7-year-old boys. Firefighters were able to remove the Christmas Tree and all gifts before they were damaged by the fire, smoke, and water.

Lakeville Firefighters repeatedly expressed their sadness to the family, as they will not be able to be in the home for Christmas. The family wished to extend their gratitude to the firefighters who saved their home and the vigilant neighbor who discovered the fire and saved the dog.

Lakeville Fire Chief Mike O’Brien wanted to congratulate responders on their aggressive stop. “Our firefighters saved this home tonight. Although the family will be out of their house this Christmas, I think we can all be grateful that the Cruz family can spend the Christmas together. No one was hurt, and the house can be repaired”.