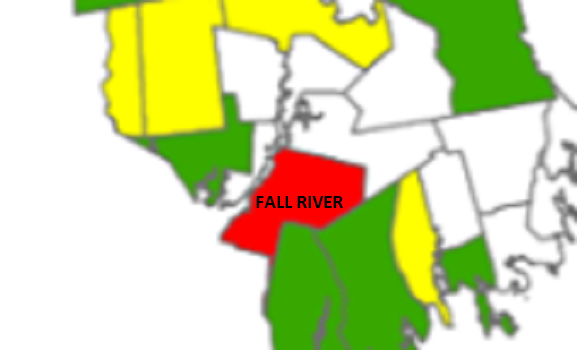 Gov. Charlie Baker on Tuesday rolled out a new color-coded municipal measurement of COVID-19 infection and spread levels, announcing then that four cities — Chelsea, Everett, Lynn and Revere — fell into the worst “red” category based on local public health metrics. The Department of Public Health’s first update, published late Wednesday, added Fall River, Granby, Holyoke, Hull, Lawrence, Saugus and Salem to the list of communities coded red, meaning they had an average of more than eight daily cases per 100,000 residents over the last 14 days.

Thirty-three municipalities fell into the higher-risk yellow or red categories when Baker first announced the rankings. In Wednesday’s report, that number was up to 46. DPH plans to update the assessments each Wednesday.

While no communities that had previously had red status moved to a lower-risk designation, Auburn and Belchertown dropped from yellow to green. Because the numbers are based on population, lower case counts have more impact in smaller towns. Granby bumped into the red with a 14-day case count of seven, which brought the rate per 100,000 residents to 8.1. In Lawrence, it was 105 cases over the two-week span that pushed the rate to 8.5 per 100,000.

State education officials have released guidance on how schools are expected to reopen — on an in-person, remote or hybrid model — based on their community’s color designation, and Baker has said municipalities assigned red or yellow will be offered state assistance with testing, contact tracing, gathering-size enforcement and public awareness campaigns. Municipalities with a red designation are recommended to have remote only learning in schools, according to state education officials.

When we contacted Mayor Coogan’s Office on what type of assistance the City would receive, it was stated that the Mayor is still in conversation with the Governor’s office about what the resources will look like in Fall River.